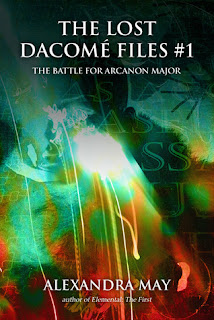 The Battle for Arcanon Major by Alexandra May
My rating: 5 of 5 stars

THE BATTLE FOR ARCANON MAJOR lays the background and history for Alexandra May's ELEMENTAL: THE FIRST, book 1 in the Primord Series. As an action-packed, fast-paced, prequel, it tells of Halíka Dacomé and Nerído Xipilé in their true forms and you learn about their love story from the beginning.

Halíka Dacomé is a warrior princess who possesses powers to heal, mindspeak, and draw upon the earth in battle. Her prowess as a leader and soldier have led her people to victories over and over. Although her loyalties to her race has been proven over and over, she is deceived by the king, her own father and ordered to marry the leader of the enemy, thus insuring the survival of all, or so she is told. Unfortunately, her heart belongs to Nerído Xipilé, a man from another planet and race. When he comes to her and proposes marriage, of course, this is what she wants, especially after feeling the betrayal of her own father.

When the opportunity to defy the laws of war arise, in order to save her people, Halíka Dacomé takes the risk, with the help of her closest friends. In the aftermath, she finds even more betrayal and pain from those she loves.

Halíka Dacomé is a strong character, who thinks with both her head and her heart-probably her biggest downfall! Alexandra May has developed her characters so well that you feel all of the emotions, see the scenes, feel the power of the moment! This is a MUST read for anyone who has already or will be reading ELEMENTAL: THE FIRST! Well done! I was glued to the pages, white-knuckling it all the way!