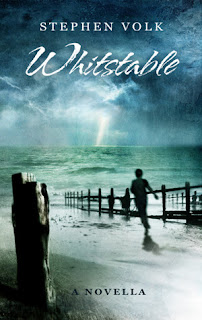 Stephen Volk has written his novella, “Whitstable,” to commemorate the hundredth anniversary of Peter Cushing’s birth in May 1913, by creating a tale of Cushing’s tortured and self-absorbed life as he grieved the recent death of his wife, Helen. Cushing has fallen in to complete despair, cut himself off from all forms of comfort and support, wanting only to face his own death and joining his love. While on a solitary visit to the beach, He is approached by a young boy, Carl, who recognizes him as the hero Van Helsing, slayer of vampires and all things evil. Carl needs a hero, and in his innocence, begs Cushing to help save him from the abuse of his mother’s boyfriend who he believes to be a vampire, because, after all, this is what Van Helsing does, right?
The boy’s plea awakens something within Peter, who realizes that this ‘vampire’ is a much more nightmarish and vile creature and makes it his mission to save Carl and bring him justice. After a failed attempt to convince the mother, Peter is confronted that evening by Les Gledhill, the man in question, who of course, plays the hurt, yet concerned father-figure, but there is a dark sinister vibe emanating from him. The deeper Peter commits to helping this unprotected young boy, the closer he comes back to the land of the living, finding renewed strength and purpose to his life. With renewed purpose, Cushing challenges Gledhill with the truth, while alone in a dark theatre that just happens to be showing one of his movies. Has he rattled Gledhill enough? Will the truth come out and save Carl?
Stephen Volk has created a dark and unflinching novella, depicting the pain of loss, holding on to love, and realizing there is hope for the future in reaching out to others.