Dancing in the Dark by Virginia Kelly 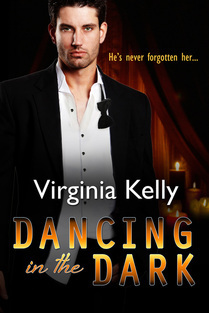 Dancing in the Dark
by Virginia Kelly

Janey Blackmon has loved Matt Kincaid since she was in high school. Matt left for the military right out of school, taking Janey's brother with him. Janey became the town's librarian but through it all her feelings for Matt have never waned.

Janey receives a strange phone call from her brother's CIA boss. From the questions he asks her, she assumes her brother has gone missing. Fearful for her brother's life, Janey realizes that Matt might be her only hope to discover what is really going on. Both Matt and Janey's brother have joined a covert branch of the CIA after leaving the military. Of course, Matt can't disclose any mission information but Janey is determined to uncover her brother's true situation.

Matt has come home to his mother's house, in Walton Springs, for some R&R and gets an unexpected surprise. Janey is sleeping in his old room and flood waters have trapped them alone together. He has always been attracted to Janey and it seems this is the perfect cocktail to push ten years of suppressed passion into igniting.

Walking the razor's edge, Matt must keep his oath to his country while protecting the woman he is growing to love. Can Matt, the CIA operative, have the woman of his dreams or will his career get in the way?

This was a tremendous story of love, family and adventurous spirits. The characters were genuine but still established that explosive chemistry required for a fabulously steamy romance. I loved Dancing in the Dark, it was the perfect balance of romance, romantic tension, steamy sexual encounters and real life characters made into this well designed story. Best of all, Virginia Kelly made me want more...I can't wait to check out In the Arms of a Stranger, the story behind Janey's brother's disappearance coming October 2013.

I received this copy of Dancing in the Dark from Virginia Kelly in exchange for a honest review.

Find this book on Amazon.