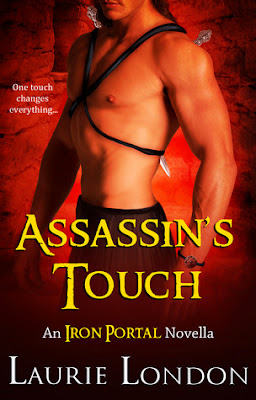 Haunted by loss, Cascadian assassin Rickert D’Angelus is on a mission of vengeance. Determined to stop the Pacifican army from finding a portal to his world, he leads a group of warriors into New Seattle with one goal—to kill all Pacifican soldiers.

Neyla Trihorn had the perfect life until a deadly accident revealed her latent para-abilities. Now, the former fashion designer is the Pacifican army’s hottest commodity in their fight against the invaders.

When Rickert discovers a beautiful, unconscious soldier on a cold mountain ledge near the portal, he realizes she’s a Protection-Talent and cannot be killed. To prevent the army from using her skills again, he takes her as his prisoner instead.

But when he pulls her into his arms, a sexy and compelling vision appears, awakening something inside him. Something he can’t ignore.

Torn between duty and passion, Rickert must decide if the vision is a Talent trick designed to foil the enemy or the answer to his deepest desires...

My Review:
Two worlds live side by side, separated by a portal and the fear of the unknown and hate. One world is filled with the magic of days gone past, with fierce warriors, simple lives and the feel of medieval times. On the other side is the world of high tech, trained soldiers and a few beings with “special powers” who are used in the war against “the other side.”

When assassin warrior Rickert finds an injured enemy soldier, Neyla, who has a special talent for protection, and is more comfortable with a cell phone than a gun, the sparks literally fly. Could these two be destined for each other? How could this be possible, they are sworn enemies, two different races, or are they?

Assassin’s Touch, book one in the new Iron Portal series by Laurie London has set down a solid foundation for future installments to follow. Do you like your heroes over-the-top handsome, brave and alpha, and your heroines able to step up to the plate, when needed, or the idea of a well-trained war horse to “ride?” This short escape from reality just might catch your eye! Laurie London’s gift for heating up a story has shown through again!

I received a copy from Aspendawn Books in exchange for my honest review.