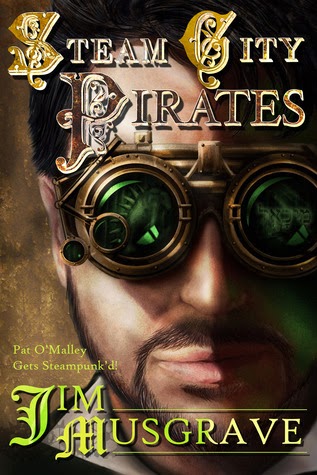 Like Alice’s rabbit, a strange “mechanical-like man” leads 1869 New York Detective Pat O’Malley down into the world of steam power. A group from the future calling itself the World Scientific Advancement Society for Progress is living secretly beneath Central Park. These pirates are inventors whose only goal is to keep the Earth in the Steam Age in order to save it from a future nuclear holocaust. Five alien assassins from other universes are ordered to kill O’Malley and his group, and each alien has a unique ability to do the job. As the Steam City Pirates build a steam-powered amusement park on Coney Island, O’Malley and his group are hunted down in the streets of New York City. The future of the world is at stake in this mystery and adventure featuring a twisting plot, steampunk time travel, steam men duels, crafty inventions, and monsters from other planets.

Sherlock Holmes goes Steampunk? Steam City Pirates by Jim Musgrave not only transports us to a place where steam rules as power, but it adds the intrigue of good old detective work and religious folklore. Yep, really, and you know what? It works! Travel to New York, in the late nineteenth century, feel the flavor of the times, the old-fashioned-ness of it all. Detective Patrick O’Malley is on the case, sniffing clues, following them and discovering that a team of scientists/inventors from the future have come back in time to tweak technology just enough to benefit their own time. Call it being proactive, or dangerously evil. Pirates are on the loose and O'Malley means to stop them. No matter what, this is a fast-paced read filled with a little of everything and it never gets old!

Jim Musgrave pulls in elements that are simply far enough out there that I loved it! O’Malley is the glue that holds everything together. His character has a history that makes him the man he is today, always looking for answers, determined, open to possibilities; a not stone unturned kind of guy. Mr. Musgrave bravely tosses in a myriad of characters and events that add the seasoning to this tale.
If you are torn between making Steampunk or a good detective story your next read, why not have them both?

I received this copy from English Majors Publishers, LLC in exchange for my honest review.