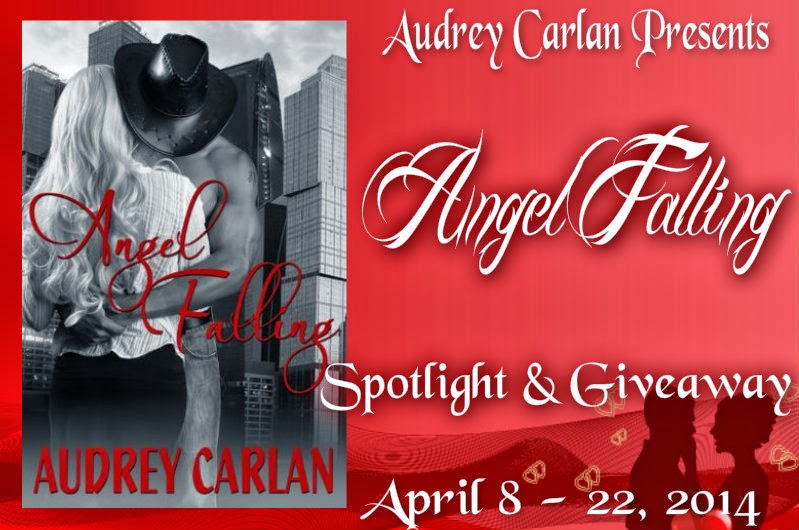 Can two people from different worlds find a happily ever after? 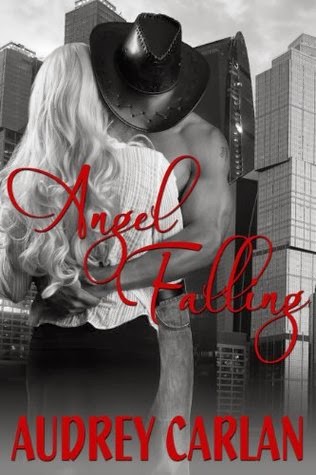 Aspen Reynolds has it all. Wealth, beauty, and a spot on the Forbes Top Ten Most Successful Women list. From the outside, she is perfect. Looks and status can be deceiving. All her life she has fought being the socialite her family has raised her to be. Now at twenty-eight she’s at the top of her game, lacking the one thing she didn’t know she’d ever want.

Accidents happen and lives are changed when Aspen is almost killed. Hank Jensen, the man who saves her, is a hard-working country boy from Texas. Hank is the polar opposite of the rich city boys she’s used to. He’s rugged, gritty, devastatingly handsome, and makes it clear that he wants her in his life and his bed.

Can two people from different worlds find a happily ever after?

Warning: This book is designed for audiences 18+ due to language and graphic sexual content. This novel will be part of a three part series but is written as a standalone between this particular couple. The other two books in the series will focus on different characters with snippets of past couples as the stories move along. 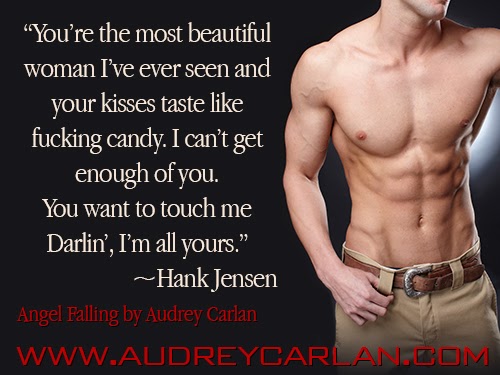 Oliver: I’m full of shits and giggles over this interview with Tome Tender. Normally Aspen is in the spotlight. This is a first for me and believe me readers, there are very few “first times” for me. <wink>
Audrey Carlan: Behave Ollie. You’re here on Tome Tender today because you were asked for specifically by the site mistress, Ms. Dii.

Oliver: I know! <hands clasp under his chin with glee as he does a perfect tight pencil spin twirl> Okay Mama Carlan, what do you want to know?

Audrey Carlan: Well, you and Aspen Reynolds have been attached at the hip since college. How are you handling having a big man like Hank around taking up your time with her?

Oliver: Having big men around has never been a problem for me. <he waggles his eyebrows suggestively> Especially when we’re talking about Hank the Hunk. Have you seen him? I mean really, your words don’t do him justice. Sad but true. The man is all that and a box of chocolate. Not one of those crappy boxes you get at the local pharmacy either. I’m talking the finest truffles shipped directly from France all that type of yummy goodness!

Audrey Carlan: Fair enough. But what do you think of Hank for Aspen? Really? You’ve always been pretty protective over our girl.

Oliver: Damn straight, I’m protective. I’ll cut a bitch if she so much as touches her perfect golden hair. Besides, it took me a damn long time to make it look as good as it does. You ever try to style baby fine hair into masterpieces? I didn’t think so. What was the rest of it? Oh yeah, Hank. <licks lips and grins> That man loves my Princess and he puts this glow to her cheeks. So much so that I rarely have to apply blush. When she looks at him she dissolves into the person I have always known her to be when she leaves her billionaires CEO baggage behind. That’s part of why I know he’s the right one. She’s the same with me, her best friend in the whole wide world, as she is with him. No man has ever torn down that wall.

Audrey Carlan: Is there anything you’d like to tell Hank and Aspen here that you haven’t told them in the book?

Oliver: <Bites his lip, checks his manicured nails deep in thought> Oh there is one thing but it’s more for Hank than my girl. Hank, I swear to God if you don’t stop ripping her underwear I’m going to take my scissors and cut holes into the ass of your boxer briefs. All of them. I mean it. I’m tired of going to La Perla every week to buy ten more pairs of sexy assed panties just so you can rip them to shreds. Control man. Use it.

Audrey Carlan: <Author laughing her ass off>Tell us how you really feel Ollie.

Oliver: I just did. Hello? Were you not paying attention? Great people … and she’s the woman writing me. <shakes his head in shame>

Audrey Carlan: So you know I’m about three fourths of the way through London’s story …

Audrey Carlan: <snort> Ollie, you crack me up. Anyway what I was trying to tell you was that London’s about to get involved with a man.

Oliver: She’s involved with LOTS of men … all the time. Most especially with her supposed best friend Tripp. How is this news? <Ollie yawns for dramatic effect>

Audrey Carlan: Nope. Not Tripp. <Ollie’s eyes perk up> And he’s going to rock her world.

Oliver: Who is it! Oh my God! Is she going to get a happily ever after? Please tell me she is. That poor girl has been put through the ringer a few times.

Audrey Carlan:  Happily ever after’s are subjective. Did you think Aspen got hers?

Oliver: You’re being obtuse as usual Mama Carlan. And uh yeah, I made sure my Princess got hers. When the shit hit the fan, it was me there to save the day. Super Ollie. Feel free to use that in a future novel. Did you not read the ending of your own book? <shakes head and rolls eyes>

Oliver: Your Hank. I’m claiming Aspen. She’s mine, regardless of what Hank seems to think. I had her first.

Audrey Carlan: Whatever Ollie. So are you excited about the wedding?

Oliver: Does this gay man love Armani? I’m standing up with Aspen. It’s very unconventional and amazing. London is Maid of Honor but only because she was born first. I know Aspen loves my pieces more than anyone. We’re leaving in a few weeks actually. Between that news and the other exciting thing to come <he winks knowing he’s holding a secret> I’m in utter heaven. My Princess is marrying her Prince, I’ll have a hot fireman on my arm and enough booze to choke a cow. And there really is cows at the ranch. As in, for real. The ones that give milk and everything. It’s going to be the event of all time.

Audrey Carlan: Alright, so it’s safe to say that you’re happy that Hank and Aspen came together in Angel Falling. My last question for you is how are you handling your own fame? The readers have been ga-ga over you.

Oliver: As they should. I’m fabulous. My fans know that I’m going to tell it like it is, with flair, and looking damn good while doing it.

Oliver: I’m not dying. Oh my God! You’re not killing me off are you? I’m going to cry. ASPEN! Aspen Mama Carlan is going to kill me off in London’s book! <Ollie sobs>

Audrey Carlan: I am not! Stop being such a drama queen. Aspen, please get your other man under control would you?

Aspen: Come on Ollie, I’ve got a new credit card that is itching to be used on some new clothes for the honeymoon.

Oliver: Okay, but let me finish this. <He lets out a long breath> I just wanted to say that I’m looking forward to being featured in London Falling because I’m not dying! <His eyes search mine and I nod> It’s coming out in May. Oh, and to all my adoring fans and readers … I love all your pieces! 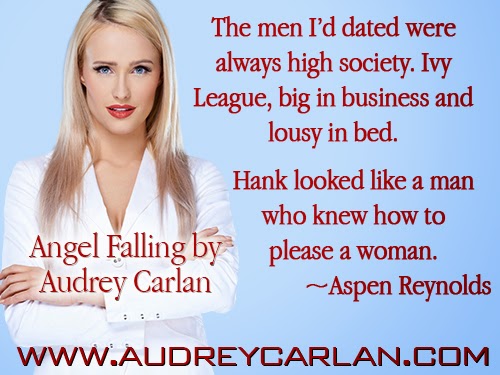 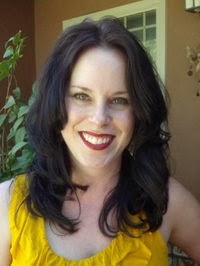 Audrey Carlan is a professional fundraiser for an international healthcare related charity by day, and a sensual and erotic contemporary romance writer by night. She lives in the sunny California Valley two hours away from the city, the beach, the mountains and the precious…the vineyards. She has been married to the love of her life for 10 years and has two young children that live up to their title of “Monster Madness” on daily basis. When she’s not raising money, sipping wine with her “soul sisters”, three incredibly different and unique voices in her life, she can be found with her nose stuck in book or her Kindle. A hot, smutty, romantic book to be exact! As a professional courtesy she does book reviews for two different blogs. One, www.thesmuttykitty.com she does erotic/romantic book reviews where she has been given the name “Zen Kitty” for her love of all things zenful. The second blog, www.tipsylit.com she contributes content as the “Tuesday Tease” contributor of all things romance and reviews books and interviews authors while pairing writing and reading with her second passion…the vino.

In life she believes that all things have their purpose even if we are unable to determine the purpose immediately. 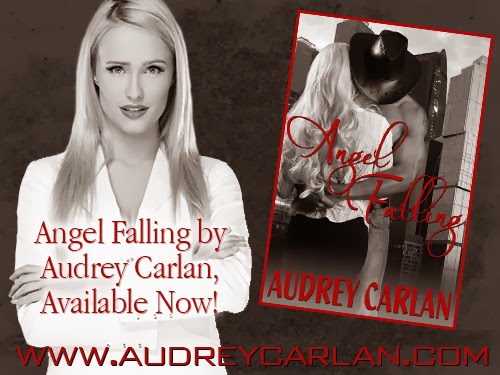 
a Rafflecopter giveaway
Posted by Dii at 12:00 AM