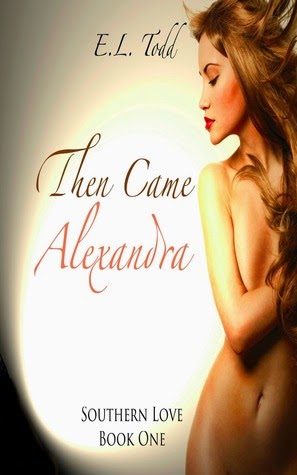 Then Came Alexandra
by E.L. Todd

After a horrific accident working as a nurse in the emergency room, Alexandra becomes reclusive to the world around her. Unable to be speak or function, she pushes away her boyfriend, Paul, of two years. Her distance causes him to spend time with someone else…the betrayal causes her to pack her bags and leave everything behind. She doesn’t know what comfort she’ll find in Savannah, Georgia, but she flees anyway.

After inheriting the most lucrative cotton field in the south, Blaise has to become a man early in life. He spends his nights with different girls, knowing they are after his money and his special abilities in the bedroom, but he makes a serious mistake with Danielle. Now she lives with him and he guards a secret that he promises to keep…even though that secret is destroying his life. When Alexandra comes into town, her smile and compassion evident, Blaise wants her, and not just in a physical way. Unable to keep his distance, he falls for her, not knowing how long he can keep his secret…

My Review
Then Came Alexandra by E. L. Todd
My Rating: 4 Stars

Why would a Southern girl who has been to the Big Apple, earned her nursing degree, gotten a rewarding job and lived with the man she loved hightail it out of there for a cotton farm in a small town back in the south? Deceit, pain, infidelity and the disillusionment of the reality of medicine could do it.
Alexandra needs a fresh start or to run away and lick her wounds and her aunt’s cotton farm seems to be the perfect place to re-invent herself and gain some focus until Blaise saunters into her life. Tall, handsome and seemingly an honorable man, Alex finds her hope for love rekindled. Although she holds her secrets close, she dares to trust again and tells all to this amazing man.
Blaise has secrets, too, a really big secret that the entire town knows about, or they think they do. Out of a misguided sense of protectiveness and honor, Blaise is involved with another woman who just happens to live with him, although he has “tried” to get her to leave. There is no romantic involvement. So why not be honest with Alexandra?

Thanks to a “friend” who claims he cares about Alex, she discovers Blaise’s secret and once again, she has been deceived by a man she trusted and cared for. A tormented Blaise would do anything to win her back, anything but tell the whole truth and nothing but the truth. But does he have competition for Alex’s heart? The old clashes with the new, as three men vie for Alex’s attentions. Are any of them trustworthy or do they all have secrets they withhold?

Then Came Alexandra by E. L. Todd adds a new level of drama and tension to romance with just enough tweeking of a popular genre that there are some fresh elements to enjoy. She writes with a passion for her story, while not succumbing to page after page of explicit sexual tension and detail. Her characters are damaged, have been hurt and fail to communicate with candor. Alex often seemed so wrapped up in hiding her past that she was missing out on a future and a truly fresh start. Blaise runs the gamut from attentive lover and over-protective knuckle-dragging male to doormat to his live in ex-lover. For a wealthy and successful business man and farmer, he has a huge collection of problems that do not seem to be addressed appropriately, and yes, he has been less than honest. Is it their ages, early twenties, that make everything such a hurdle? Is E. L. Todd telling us how, no matter what, the webs we weave will trip us up, especially without years of life experience?

With a wonderful hook to the next book in this series, this tale and these characters leave such a beehive of buzzing questions that I need to know how Alex will handle all of this male attention, as well as “the ex,” both hers and Blaise’s.