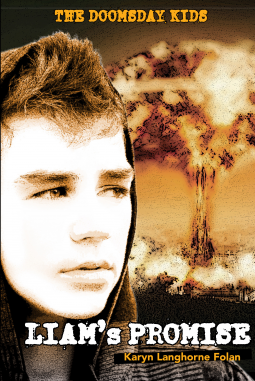 "Get to the Mountain Place!"

With those words, eight kids embark on a terrifying journey to survive a massive nuclear blast that destroys the world they once knew.

In the wreckage of their community, without food or transportation, their only hope of safety is to walk to a mountain cabin almost two hundred miles away. But the journeying under gray, radioactive skies brings the kids face to face with death and danger, deprivation and disease and worst of all: the realization that life will never be the same again.

The moment in time that the world fears has arrived. The country has been decimated by nuclear attacks, maybe even the world and a group of eight kids make an unlikely group as they forge their way to the safety of a hidden mountain cabin, hundreds of miles from home. Was it fate that each child would bring something special to their group in their struggle to survive? Old rivalries and jealousies are slowly beaten down as they learn they only have themselves to depend on and the hope they will reach a safe haven prepared by Liam Harper’s survivalist father, the laughing stock of their community. But no one is laughing now as Liam leads his group with the skills his father had spent years drilling into him. Can a teenaged boy accomplish what few left alive could do and keep his humanity?

The prom court princess, the bully-jock, the two bookworm brothers are as far from survivalists as anyone can get, but they learn quickly, the hard way. Liam, along with his special needs sister and her young Hispanic friend, as well as Liam’s crush from school round out this troupe who journey through miles and miles of death and destruction only to be attacked, stolen from and faced with all that nature can throw at them. Will they all survive to make it to the mountain? Will heroes rise from their ranks? New alliances are forged from nothing in their quest for survival, new strengths are revealed and unbreakable bonds are formed.

Wow, just wow. This plot is full of twists and drama, but still, it’s the characters that drive this tale. The Doomsday Kids by Karen Langhorne Folan is NOT just another end of the world tale, full of angst and pain. Yes, she has built a stark and terrifying scenario that is far too real to be comfortable, but she focused her tale on these kids, on their growth, their strengths and weaknesses as they learn to harden as their trek goes on. Focusing on Liam, using his voice to narrate the story, one feels as if they are in Liam’s head, seeing and feeling all that he does, from fear, confusion and shame to his insecurities at being responsible for the lives of those with him. He is young, he is scared, but he has a sense of duty that he must succeed. The weight Liam carries on his shoulders is more than anyone should carry, but he does so in spite of his feeling inadequate.

Ms. Folan has created a powerful story of heroes, heartbreaks and the resiliency of youth that is a refreshing take on a post-apocalyptic world. Her descriptions are NOT overly gory, overly nightmarish, yet hits one in the heart, at the losses these kids must deal with and their struggle to survive by holding on to that one slim thread of hope in a world poisoned by hate.

I received an ARC edition from Doomsday Kids in exchange for my honest review.