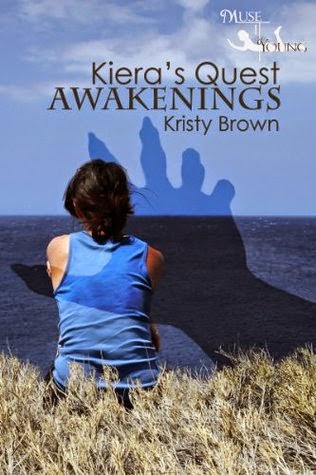 Meet Kiera, a pretty, intelligent, and talented girl, brought up by her uncle, and abandoned by her parents. Life is as normal as she believes it to be, apart from the deep ache inside her,
telling her she’s different. For years, Kiera had dreams where she ventures into a different reality. She’s not alone; a presence is always there, keeping her safe, yet she feels vulnerable,
and hunted.

Zakk, Prince of Zantar, is under the Witch Queen’s spell as she tries to take over his world. He crosses paths with Kiera, and their fates are entwined.

As their journey unravels, she learns that she is not the only one affected by this prince. Who is on her side? Will she find out why she has been chosen? How can someone so young, defeat such evil? Will she find the strength to save the ones closest to her? Will this be Kiera’s only Quest?

Another summer reading gem for kids from 9 to those who are kids at heart! Filled with fantasy, wildly imaginative writing and catering to middle grade readers on up, Kristy Brown’s Kiera’s Quest: Awakenings is the kind of delightful read that turns sometime readers into avid readers!
Zakk, the Prince of Zantra has lost both of his parents to the evil ways of the Witch Queen and now she has cursed his soul and trapped him inside the “body” of an action figure doll. Is she finished with him? Not quite, she then sends him through time and space, only to end up within shouting distance of young Kiera.

Kiera is a bright young girl whose imagination can run wild, especially in her dreams, but a doll calling to her for help? Is she losing her mind or is she about to find out why she has always felt different? Time is running out for the prince and Kiera may be his last hope at being freed from this curse. But how can Kiera triumph over evil? Who can she count on to believe in her, and in Zakk?

Kristy Brown takes her readers on a fantasy journey filled with sights, sounds and danger as Kiera struggles to save Zakk. She writes with such a carefree style that moves along at a great clip, never sparing the details to fuel one’s imagination. The daring of youth, the ability to turn fantasy into reality, to form friendships and leap into the unknown are all captured by Kristy Brown in living color as she connects with her readers with a passion for her work that is simply magnetic. From the dialogue to the background settings of this world, Ms. Brown has spared nothing in bringing this tale to life.

Will Kiera's Quest: Awakening stand up to the scrutiny of younger readers? I have to say YES! Will it be a joy to read as a family, sharing everyone's input? YES, again!