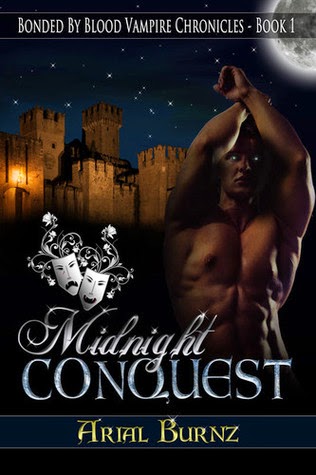 Masked in a Gypsy guise, Broderick MacDougal hides his vampiric identity while seeking to destroy the man who slaughtered his family. When an old Clan rival ensnares Broderick in a trap using an enticing widow, he is compelled to discover if she is bait or an accomplice, and the cinnamon-haired beauty is his next conquest.

Widow of an abusive husband, Davina Stewart-Russell clings to the only image that gave her strength during those dark times--the Gypsy rogue who stole her heart as a youth. After nine years, she is finally face-to-face with him again, but reality clashes with fantasy as she is confronted with Broderick's passionate pursuit.

When Davina's past returns to haunt her, Broderick is forced to reveal a dark secret worse than anything Davina thought possible. The challenge before them has fatal risks and neither of them is prepared for the sacrifices expected for the sake of eternal love.

My Review
Midnight Conquest by Arial Burnz
My Rating:  5 Stars

I don’t normally read any reviews before writing my own, but one caught my eye and pretty much reflected my exact thoughts: Um…holy crap? (Thanks, A.J.) Talk about historical/paranormal/romantic bliss wrapped in dark intrigue! Midnight Conquest by Arial Burnz sent me back to a time and place where superstitions and myths can become reality, gypsies have “the sight,” and two souls can find bone deep love that will last an eternity.

Davina meets the man she feels sure she is destined to love as a child, but there is more to Broderick than his handsome appearance, much more and soon he is gone. The years go by, Davina has married an abusive man, had his child and freed herself from his brutal clutches. Broderick comes back into her life, and although they have both changed, their hearts have not. But will loving Davina put her in danger from an ancient enemy out to destroy Broderick? Will she accept who and what he is?

Arial Burnz rocked my world with the attention to detail she uses to set her stage for this dark and often edgy romance. Her characters are simply amazing, from the old gypsy woman to the brutal and vindictive vampsyrian out to bring Broderick to his knees before ending his immortal life. Davina hasn’t let her life bury her in self-pity, she has a fierce a protective side that is a joy to see, especially for the era she lives in! And Broderick? I think he may be the ultimate romantic hero, in spite of his need for blood.

Once Ms. Burnz has her world firmly planted in your mind, this tale takes off and never lets up! She has created an atmosphere that feels real, feels dangerous, yet she never let the romance falter for a minute. Take a walk on the dark side of history where love is like a beacon bringing two people together as they share a once in a lifetime love!

I cannot thank Arial Burnz enough for sharing this copy with me!