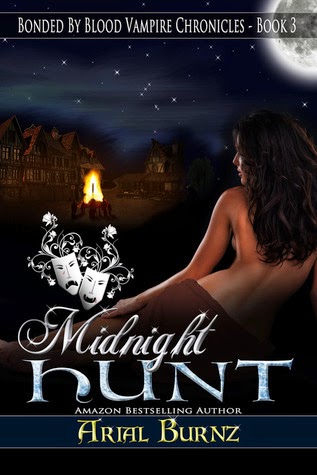 Synopsis:
Germany - 1636
Driven by the desire to have the true love she's experienced in her dreams, MONIKA KONRAD uses her magical skills to weave a love spell during the waxing of the moon. As if in response, a strangely familiar Vamsyrian enters her village looking for wolfsbane. Could he be her soul mate delivered to her by the Gods? Or is he the answer to her prayers to protect her and her grandmother from the werewolf that killed her parents?

BRODERICK MAC DOUGAL is drawn to the powerful witch by a familiar force and a vision from the prophetess says Monika is the next phase in the prophecy. Rick makes the raven-haired wise woman his next pursuit to unravel this mystery of why she reminds him so much of his late wife, Davina. However, there are other supernatural forces surrounding her, exposing Rick to a darker side of this deal he made for immortality...and this enchanting nymph may be his salvation.

Broderick's quest for answers causes a chain of events that starts a witch hunt, dooming both him and Monika to the fiery stake of judgment. And through these trials, they learn the Church has a new ally who is hunting down the members of the Army of Light.

My Review
Midnight Hunt by Arial Burnz
My Rating: 5 Stars

Not sure how she did it, but Arial Burnz topped her own work with Midnight Hunt the third book in the Bonded by Blood Vampire Chronicles. Ms. Burnz takes her readers to 17th century Germany, to the home of a young and feisty witch who has a very special connection to the ancient vampire, Broderick. Alone for decades, Broderick has wandered, his family is long deceased, but on the 80th anniversary of his beloved Davina’s death, a miracle occurs, and the prophecy one again intrudes on Broderick’s life. Monika is young, fiery and fierce, a witch of many talents and her connection to Broderick runs soul deep. How does this young girl evoke long dead emotions in the vampire? As always, danger is casting its dark shadow over Broderick’s life, but there is more to fear than Angus, as other creatures no have Monika on their radar. Is she, too part of the prophecy that could save the world of the creatures from the dark? The curse of the werewolf is spreading and only Monika can end their suffering and killing sprees. With the odds stacked against them, what kind of relationship can Monika and Broderick have? How has she stolen his heart? How can he forget the love of his life, Davina?

Arial Burnz had made fast-forwarding to the future seem easy! Not a link in her chain breaks, the flow feels so natural, I felt I was there, seeing all of it. With characters as fresh, varied and unique as her vampiric tale, Ms Burnz once again, flexes her writing muscles and turns her imagination loose to create a riveting and atmospheric tale. Highly recommended! Sit back and savor the flow of Arial Burnz' historical world.
Posted by Dii at 11:53 PM