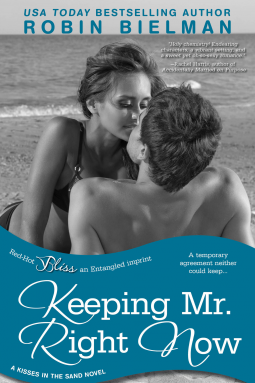 
A temporary agreement neither could keep…
Brainy, organized Sophie Birch is no beach bunny. In fact, she’s totally out of her element among the sun-bronzed crowd at a film festival in beautiful White Strand Cove. When a surf lesson introduces her to Zane Hollander, suddenly she's up close and personal with the world's sexiest surf star. But what can a great-looking, experienced athlete possibly see in a klutzy out-of-towner who’s never set foot in the ocean?
Zane Hollander's playboy reputation has never been a problem…until recently. Now his management team wants him on his best behavior to entice a meaningful new sponsor. Sophie Birch is the perfect girl to help reform his image. She's genuine and respected—and their relationship is purely fictional. But the more Sophie blooms under the beachy sun, the more Zane knows he'll just break her heart. Because nothing's more important to Zane than following the tide.

What do you consider your greatest asset? Sophie believes it is her brains, because she is not a beach bunny, not a snow bunny, not the girl that guys fall all over. Taking a job to prove her worth as an event coordinator, becomes more than a mental test for Sophie as she meets the hot and handsome, bad boy surfing machine that is Zane. What could these two possibly have in common? Turns out they both have insecurities and pasts that have left their mark, but neither seems to wallow in their own pain, but work hard to overcome their “issues.” Both see themselves as not “good” enough for the other, but the attraction is undeniable, because the heart always knows better, right? Can Sophie learn to listen to her heart or will she run from the best thing that has ever happened to her? If she runs, will Zane follow?

Keeping Mr. Right Now by the talented Robin Bielman is completely charming and captivating as a light, wonderful romantic read. The tension and banter between Sophie and Zane is perfect as they dance around their attraction in a sun and surf setting that feels warm and breezy. The inner battles they fight felt real, with all of the sparks that new relationships have and all the denials of how deep the feelings are growing. Ms. Bielman built a world that sparkles and populated it with completely likeable characters that can be humorous one moment and completely endearing the next. She writes with a pace that never rushes, but blooms and grows with each scene, and taking her time to get to the sizzle was perfect. All around, a wonderful read from a talented author.

I received an ARC edition from Entangled Publishing/Bliss in exchange for my honest review.