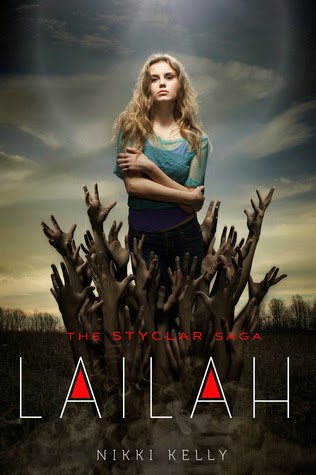 The girl knows she’s different. She doesn’t age. She has no family. She has visions of a past life, but no clear clues as to what she is, or where she comes from. But there is a face in her dreams – a light that breaks through the darkness. She knows his name is Gabriel.

On her way home from work, the girl encounters an injured stranger whose name is Jonah. Soon, she will understand that Jonah belongs to a generation of Vampires that serve even darker forces. Jonah and the few like him, are fighting with help from an unlikely ally – a rogue Angel, named Gabriel.

In the crossfire between good and evil, love and hate, and life and death, the girl learns her name: Lailah. But when the lines between black and white begin to blur, where in the spectrum will she find her place? And with whom?

Gabriel and Jonah both want to protect her. But Lailah will have to fight her own battle to find out who she truly is.

My Review
Lailah by Nikki Kelly

Tales of Angels versus Demons, the classic battle of good versus evil, but what happens when the lines are blurred, when neither side can be placed perfectly in their box? Lailah by Nikki Kelly goes above and beyond in the fantasy genre when she combines mystery, love, heartbreak and deceit to the mix as a young woman discovers who and what she really is. Cessie has no idea why she doesn’t age, doesn’t die, but it makes for a long and lonely life as she keeps her distance from others and moves under the radar of life. Fate put her face to face with Jonah, a vampire, who falls in love with Cessie. Is his love a danger to her? Enter Gabriel, an angel on a secret mission who falls in love with Cessie. But is HIS love a danger to her? Cessie knows she isn’t human, but the discovery of who and what she is will bring the most powerful of demons to claim her for his own. Can she be saved from the clutches of eternal hell, or will the angel claiming to be her father be the weapon of her destruction. Is she a fallen angel? Is she a demon? Is she part vampire? An innocent girl carries the weight of the world on her shoulders, a misfit in any world, through no fault of her own, her angst is palpable.

This world is dark, veiled in mystery and filled with intense characters. Vivid scenes, true grit and heart make up the tone of Nikki Kelly’s creation. Populated with characters with honor, which care for those around them, good and evil find a common ground, thanks to the talent and belief in fantasy of this author. The romance in Lailah is both heartwarming and heartbreaking, with no clear winners, no “this guy is better than that guy” position taken. Light is not always good and dark is not always bad was the message I got.

Nikki Kelly has truly added a different dimension to the paranormal romance genre. Using tried and true favorites and combining them in new and creative ways, Ms. Kelly has come up with a winning dish that is sure to be a crowd pleaser! 4.5 Stars


I received an ARC edition from Macmillan Children's Publishing Group/Feiwel & Friends in exchange for my honest review.