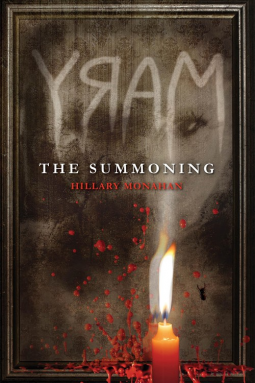 MARY: The Summoning
by Hillary Monahan

There is a right way and a wrong way to summon her.

Jess had done the research. Success requires precision: a dark room, a mirror, a candle, salt, and four teenage girls. Each of them--Jess, Shauna, Kitty, and Anna--must link hands, follow the rules . . . and never let go.

A thrilling fear spins around the room the first time Jess calls her name: "Bloody Mary. Bloody Mary. BLOODY MARY." A ripple of terror follows when a shadowy silhouette emerges through the fog, a specter trapped behind the mirror.

Once is not enough, though--at least not for Jess. Mary is called again. And again. But when their summoning circle is broken, Bloody Mary slips through the glass with a taste for revenge on her lips. As the girls struggle to escape Mary's wrath, loyalties are questioned, friendships are torn apart, and lives are forever altered.

A haunting trail of clues leads Shauna on a desperate search to uncover the legacy of Mary Worth. What she finds will change everything, but will it be enough to stop Mary--and Jess--before it's too late?

My Review
Mary by Hillary Monahan

Remember the days when you and your friends would hold seances, call spirits with a Ouija Board and end up scaring the pants off yourselves, even though nothing really happened? When four teens attempt to summon a frightening legend from the past, the infamous Mary Worth, they get more than the thrill of an “imaginary” scare, they get the real deal in the form of a bitter ghost from the past who manages to cross into this world to seek revenge for her tormented life. When she manages to taste Shauna’s blood, Shauna becomes Mary’s focus and the object of ghostly stalking. How could an innocent night turn into a living nightmare for these teens, one that no one would believe? Their lives will never be the same, their bonds are tested and Jess’s obsession with Mary may be more than it originally looked. Will the others pay the price? Is there no way to send Mary back or she trying to send a message from the past?

Mary: The Summoning by Hillary Monahan is a teen horror-lover’s nightmare-come-true! Dark, edgy and just creepy enough to have one looking over one’s shoulder from time to time, Ms. Monahan has conjured a tale that is equal parts chilling and entertaining as she builds the perfect setting for horror without going overboard for her YA audience. Her characters are lifelike, down to the dialogue these girls share and the fear and excitement they exude as we are led through the portal into horror. Using just enough attitude and detail for her audience, and bringing Mary’s character to life while still shrouding her in darkness is brilliant, magnetic and just little creepy.

Okay, I admit it, I like to be scared, but, I kept a few extra lights on after reading this and I’ve been avoiding cleaning my mirrors, windows and even dusting. I just am not about to tempt fate until Mary is returned to her world, so no shiny surfaces at my house!

I received an ARC edition from Disney Hyperion in exchange for my honest review.