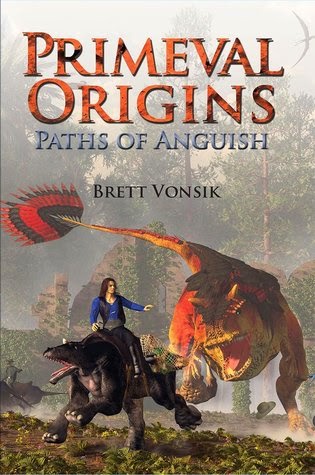 The Harbinger of Judgments hails the end of a world cycle as prophesied by the Mayans, Hopi, and other past civilizations. Much older than believed, mankind's origins are revealed from the ashes of a never remembered ancient civilization where gods, alien intelligences, and horrific dangers seek to subjugate man. Primeval Origins, Book 1: Paths of Anguish joins our world's troubled future with the primeval past in an epic journey of discovery, treachery, realization and courage as ancient powers and mortals battle for control of mankind's first civilization. Live the tale of our creation through the lost memories of souls who are at the heart of man's mythologies and religions as they awaken in modern times to fulfill their purposes in the divine plan for us all. More than 20 years in the making, Primeval Origins weaves together humanity's oldest creation myths, religious beliefs, social and political landscapes and the ever changing earth into a grand telling grounded in recent discoveries that mankind's ancient myths are based in unacknowledged happenings. Join the world of Primeval Origins now as it reveals this epic tale of Creation's guiding hand, petulant godlings, noisy mortals, and ancient evils ever challenged by good in the ultimate test of the human soul.

My Review
Primeval Origins: Paths of Anguish by Brett Vonsik

Ancient history comes to life at a paleontological dig when the discovery of the well-preserved skeletal remains of a dinosaur is discovered with what appears to be cleanly severed breaks in several bones. An unusual sword is found that defies the test of time, made from an unusual material that baffles the minds of those at the site. How could man be alive in the time of dinosaurs? History will be rocked back on its heels and this could be the greatest mystery to be solved, ever! When a large chasm is opened in the ground, a young Dig assistant, falls through, and like Alice falling into the rabbit hole, Nikki is transported into a strange and often brutal world eons old, and relives the experiences of a young warrior/hunter-in-training determined to prove he is a man, finding his own path in the world. As this primitive, yet organized group survives through an organized hierarchy; corruption and political machinations threaten the fiber of their existence and young Rogaan learns that life is much darker and more complicated than he could have imagined. He is forced to grow up quickly when his once sheltered world becomes a living nightmare he never knew could exist.

Primeval Origins: Paths of Anguish by Brett Vonsik has all the trappings of an epic historical fantasy in the making, with the potential to gain a cult following of this genre’s avid fans. Told in rich detail that alters its pace as a scene requires, every emotion comes to life as Rogaan feels fear and insecurity as well as triumph, anger and the self confidence that blossoms in the hearts and minds of the youthful.

After the intricate world building, this tales settles in nicely and the reader is transported into another fascinating world that is difficult to say good bye to. This isn’t a race to the finish type of read, this is a tale to live in the moment with each character, to see the value and loyalty of friendship, the bitterness of competition, as well as an in-depth look at a fresh take on crossing the barriers of time to “see” the story an ancient set of bones can conjure. Are you looking for something to test the boundaries of your imagination, with the feel of a wonderful tapestry depicting a magical tale? Primeval Origins: Paths of Anguish will do that and more! Brett Vonsik’s passion for his work shines through in this one and an author with passion is one to follow.

I received a copy from Brett Vonsik in exchange for my honest review.