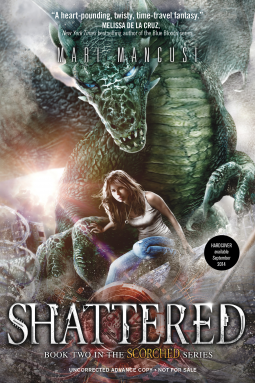 Trinity, Connor, and Caleb are trying to stay under the radar, holed up in an abandoned West Texas farmhouse. Their only problem is Emmy: a baby dragon that's growing like crazy. When Emmy is caught on tape and the video goes viral, they find themselves on the run again. Their only hope comes from an old map leading to a man who has come from the future to help them. But with the government hot on their heels and Caleb's growing addiction to spending time in the Nether world, will they be able to reach him in time? And will keeping Emmy safe end up being too high a price for Trinity to pay?

My Review
Shattered by Mari Mancusi

Dragons are one of the most amazing of the many fantasy creatures and now, only one dragon is left on Earth. On the run with three young people who are determined to save the world from a dragon apocalypse, Emmy is a delightful, loyal companion for Trinity, the young girl who stole Emmy’s egg and has been at her side ever since.. With the help of brothers, Caleb and Connor, Trinity will stop at nothing to keep Emmy safe and hidden when things get out of hand, an unlikely source steps up to the plate with much needed assistance.

Mari Mancusi’s Shattered is a thrill ride from start to finish as danger lurks around dark corners and trips to the Nether world become an addiction for the insecure Caleb. The youthful love triangle is not overplayed, and contains all of the confusion of a teen’s feelings regarding affairs of the heart. Each character is well-defined and Trinity shows strength of character, and true loyalty to the growing Emmy. Ms. Mancusi writes with an eye and heart for her audience and it shows with every scene and all of the ups and downs of Emmy’s fight to survive!
Thoroughly enjoyable fantasy wrapped into a contemporary world kids can relate to! Fresh, fast and furious!

I received an ARC edition from Sourcebooks Fire in exchange for my honest review.