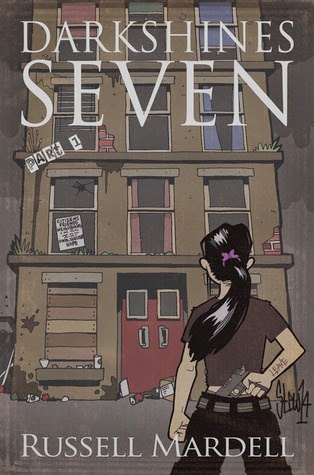 Beyond Bleeker Hill
by Russell Mardell

Great Britain has broken. The government has imploded and rioting and anarchy have been commonplace for a long time. In the fallen cities and the desolate countryside, people cling to new lives found and forged amidst the chaos. Stepping into the void of power a mysterious group known only as The Party, are attempting to restore order however they can.

Eighteen year old Mia Hennessey, along with her faithful dog Blarney, walks the empty roads and lives her life in the broken cities. Hunted by The Party and haunted by the horrors she encountered at a place called Bleeker Hill, Mia finds herself strangely drawn to the outskirts of City 17, a dangerous place where her past and present will collide and a dark and deadly mystery will slowly unravel.

My Review
Beyond Bleeker Hill by Russell Mardell

Only months after the sinister events at Bleeker Hill, young Mia Hennessey is on the run, traveling the desolate and dangerous roads of Great Britain, alone, except for her dog. The implosion of law and order, the comfort of a stable government are gone and the country is living a chaotic hell. The worst of mankind threaten the weak and there is no champion. The Party claims to be winning the loyalties of the people, doing what is best for them, but lurking in the shadows is their true intent, and they want Mia. For what purpose? Hasn’t Mia been through enough? What is so special about Mia? What pulls her toward one of the last places she should go? City 17 is crawling with people, the last thing Mia needs in her attempt to remain free. What is “The Wash?” Salvation from the chaos? Manipulation at its worst? Will the horrors of Bleeker Hill come back to haunt her?

Beyond Bleeker Hill by Russell Mardell is dark, edgy and holds just the right amount of tension and mystery close to the vest. Mr. Mardell brings this tale to life with vivid scenes, often stark and bleak, adding to the atmospheric feel of a destroyed, dystopian world. Mia is a deep character with just a shadow of a blur on her character, leaving the reader to wonder what she is keeping secret. There is more to her than meets the eye, she is a survivor, forced to deal with this new world on her own. Russell Mardell keeps the reader on the edge of their seat as each dark corner is turned and never lets up. Once you enter this world, you will walk alongside Mia, and see what she sees, thanks to the powerful writing of this author. Do you like dark and edgy? Want to look into the shadows beyond and take a walk on the dark side of a dangerous world? This could be just what you’re looking for, and more.

Email ThisBlogThis!Share to TwitterShare to FacebookShare to Pinterest
Labels: #1 in series, author review, own, Russell Mardell, YA Dystopian Fantasy