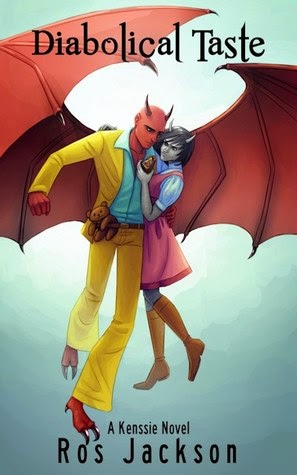 Kenssie just wants her fellow demons to respect her. A little hero worship now and then wouldn't go amiss either. But as the lowly thrall of Rak, an embarrassment demon, she'll take whatever crumbs she's offered.

When the demon council turns against her master, Rak and Kenssie are forced to relocate to the countryside. It seems Rak has been holding out against his thrall and keeping a secret that will shake her trust in him forever.

When someone from Rak's past returns to claim him, Kenssie has to fight for much more than his attention. The lives of innocents and not-so-innocents are on the line. How much of herself is she willing to sacrifice for someone else's happiness?

Well! Talk about raising the bar! I liked Ros Jackson’s The Secret Eater, it had a dark and evil feel at times. Diabolical Taste , on the other hand seems to bring the characters more to life, delving deeper into their feelings and their interactions, particularly Kenssie’s feelings for Rak and the guilt she feels for falling for her master. As a mere thrall to her demon, she is looked down on, one grain of sand on the ocean’s beaches. Like a ghost haunting Rak’s past, an intruder comes to their remote land and Kenssie is definitely off Rak’s radar. Human, thrall or whatever, Kenssie is in emotional pain and Rak will never see anything she does as more than an act of petty jealousy. How far can she go to make sure he is happy, or safe? Is their relationship really a badly bent abusive situation? Will Kenssie ever learn to value her own self-worth?

Ros Jackson has given more life and depth to her characters, added some humorous scenes at the expense of a certain demon with an over-inflated ego and helped Kenssie to appreciate herself, all while creating tension, danger and a delightfully quick read.

I received this copy from Ros Jackson in exchange for my honest review.

Email ThisBlogThis!Share to TwitterShare to FacebookShare to Pinterest
Labels: darkparanormal, own, Ros Jackson