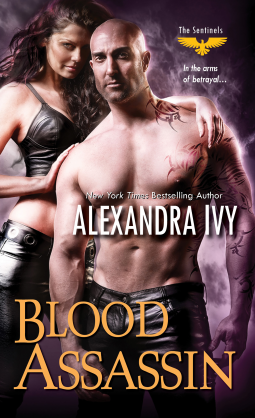 Synopsis:
They are the outcasts of humanity. Blessed with power. Cursed by fate. Driven by passion. The Sentinels have returned. . .

Out Of The Shadows

At six-foot-three and two-hundred-fifty pounds, Fane is a natural born guardian. A flawless mix of muscled perfection and steely precision, he has devoted years of his life to protecting a beautiful necromancer. But after she found love in the arms of another, Fane has been a warrior adrift. He swears allegiance only to the Sentinels. And no woman will ever rule his heart again. . .

Not only a powerful psychic, Serra is that rare telepath who can connect to minds through objects. When the daughter of a high-blood businessman is kidnapped, Serra agrees to help. But when she stumbles onto a conspiracy involving secrets sects and ancient relics, her life is in mortal danger--and Fane is her only hope. Is the warrior willing to risk his body, his soul, and his heart, for Serra? Or will one last betrayal destroy them both?

Admit it; we all swoon over the hero who has an inner insecurity that is buried deep within his heart. Fane is the best of the best, the bravest of the brave, he is a Sentinel, a guardian who would die for those he protects. Outwardly fierce, he is adrift now that his former charge no longer needs him, too much time to think, not enough action. Serra is a highblood with a special talent that is needed by another to find his young daughter. Let’s say this businessman isn’t totally upfront in his dealings and has a list of enemies longer than a child’s Christmas wishlist. Naturally, instead of hiring Serra, or chancing that she may not be interested, he kidnaps her and gives her a deadly timetable to find his daughter. Serra has also been in love with and rebuffed by Fane. When Fane discovers she is missing, he will move mountains to keep her safe and alive. Looks like Fane has a huge, but secret emotional need for this fiery and amazing woman.
What they must face together is finding the child, safe and hopefully unharmed, discover who took her and why and lastly how to stop a magic time bomb ticking off the minutes of Serra’s life. Adversity and fear bring out hidden emotions, and lusts, as Fane and Serra find passion in the time they have together. Can Fane redeem himself in his own eyes, will they find the girl and uncover the hidden truths?

Never fear, Alexandra Ivy’s Blood Assassin is not a run-of-the-mill dark paranormal tale! Once again, she thrills us with her world, her fabulous dialogue, strong characters and romance. And her plot, absolutely twisted, surprising and intense. Writing like this is why the paranormal genre is huge!

I received an ARC copy from Kensington/Zebra in exchange for my honest review.