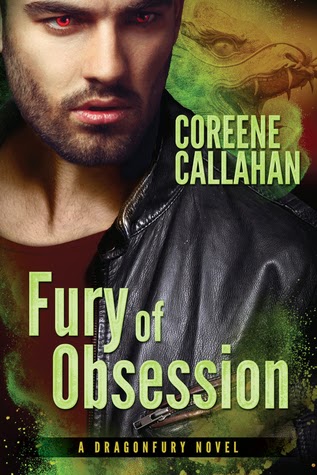 He can’t escape the sins of his past…

Toxic to all those who touch him, dragon-warrior Venom lives in self-imposed isolation, a prisoner of the poison in his veins. But when a chance meeting with a woman challenges the belief he is destined to be alone, he pulls out all the stops, vowing to put the savagery of his past behind him and take a chance on love.

She doesn’t want to face her future…

Wanted by the Russian mob, creative accountant Evelyn Foxe isn’t looking for love. She searching for the fastest way to escape instead. When Venom offers to get her out of trouble, she accepts his help, but remains skeptical, afraid he’s in league with those sent to harm her. But when someone unleashes a biological weapon in her hometown, and she gets caught in the firestorm, little choice remains—trust Venom to keep her safe or risk her life by going it alone.

My Review
Fury of Obsession by Coreene Callahan

Can a toxic dragon find true love? Luckily, Venom has a soul mate out there somewhere waiting for him and this is his story in Fury of Obsession.

Feeling extremely alone and isolated after his partner found his mate, Venom heads to a club to find temporary solace in a woman's arms.

Evelyn Foxe's life has hit rock bottom. Her mother's gambling habits has put in the sights of a loan shark with no chance of her ever being able to pay back the debt. When all options fail, she takes drastic measure that shake her to her very moral core.

When Evelyn is about to make the hardest choice of her life, Venom walks through the door and instantly knows she is his mate.

Battles in the sky, contagions ravaging Evelyn's home town and a strong alpha male giving the woman control to find her place in his life...Fury of Obsession was a great installment in the Dragonfury series.

The highly descriptive story telling pulls you into the plot and lets you feel like you can see a dragon transform before your eyes.

I did feel this story ended rather abruptly leaving a few plot directions open for further exploration in later installments, I hope...

I'm wondering were this story is heading next and what is going on with Ivar.

I received this ARC copy of Fury of Obsession from Montlake Romance in exchange for a honest review. This book is set for publication February 24, 2015.