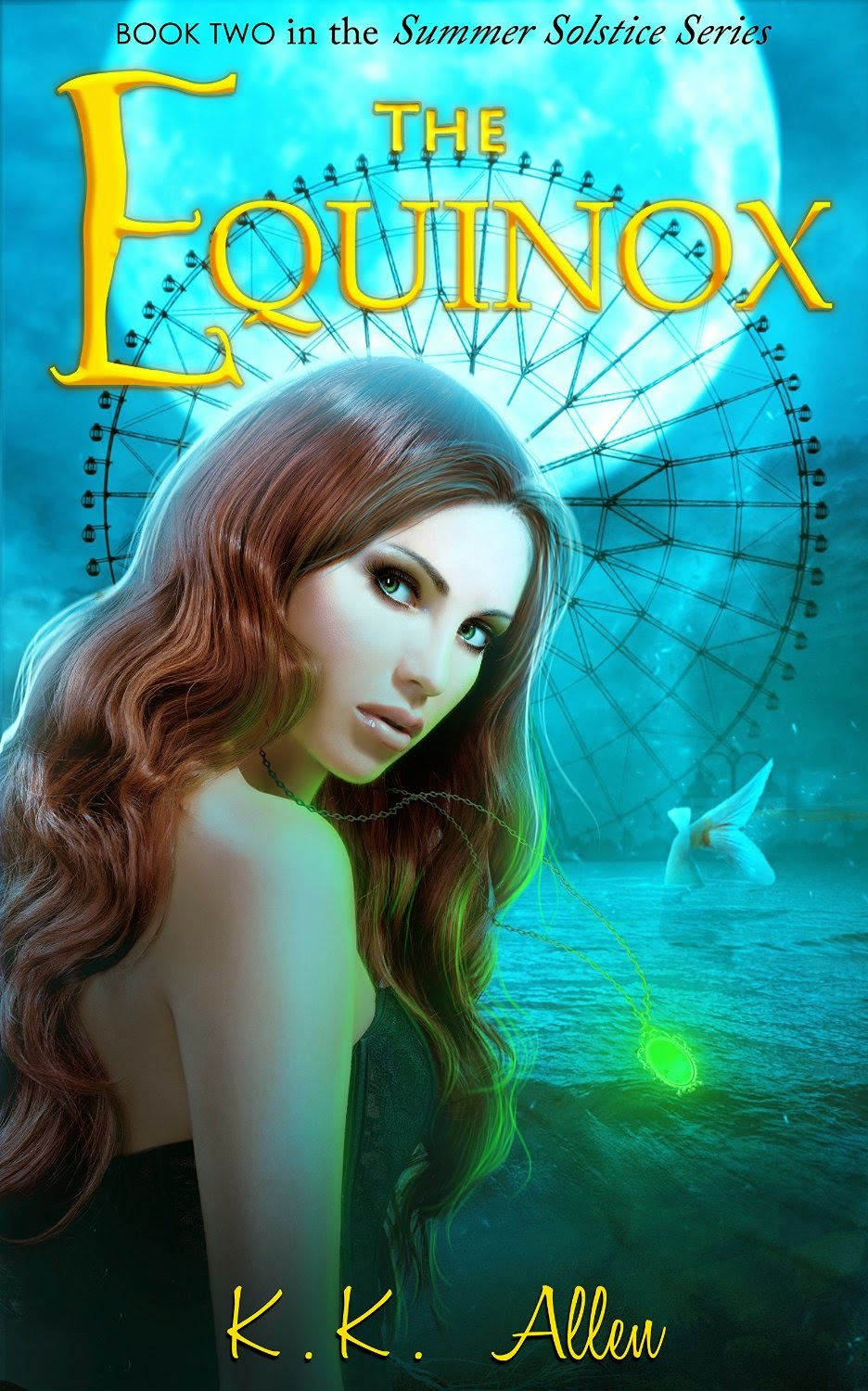 The Equinox
by K.K. Allen

Katrina Summer finally comes to terms with her enchanted skin as she is challenged with an evil that threatens the Solstice settlement of Apollo Beach...

At a private gathering on Summer Island Kat meets an entire secret society of Enchanters – and other mythological descendants of a different breed. The gorgeous Valli sisters appear forcing Kat to take a deeper look into her new existence. And when Arabella, the youngest of the sisters, befriends Kat, she learns the most disturbing Summer family secret of all.

To escape the lurking dangers of the Equinox, which brings outrage and heartbreak to the entire town, Kat accepts a job at the Island Grille where more trouble brews as her handsome, yet brooding co-worker, Johnny, makes life even more challenging. Meanwhile, Kat struggles between her lingering and undeniable attraction for Alec, the secrets that she is forced to keep from him, and a betrayal that sends them on separate paths.

Mysterious deaths, signs of pollution rising in the Bay, and discoveries of the Equinox's motives stir up an entirely new and frightening adventure as Kat finally discovers that being an Enchanter holds a responsibility worth killing for...

My review
The Equinox by K. K. Allen

Welcome back to Apollo Beach, where a group of powerful Enchanters hide in plain sight, serving in their roles as protectors of good, nature and each other. K.K. Allen is back with book two of her Summer Solstice series, Equinox and once again, she had me from page one. Kat has come to terms with her new life in a new environment as she meets more mythological descendants of the gods, each gifted with their own special brand of magic. As Katrina practices her powers, discovering new ones, and growing in magically strength, evil and its threat to the Solstice existence is also growing, becoming more deadly and drawing nearer to the final showdown in a magical battle between good and evil.

New to Katrina’s list of growing pains are boy trouble, boy trouble and more boy trouble. You would think Ms. Allen could have given her a break, but nooooooo. Katrina is up for the challenge, at least to the uninformed as she muddles her way through the ins and outs of keeping her grandmother happy, while trying to be a normal teen, whatever that means. A new job should keep Katrina feeling useful while keeping her mind off all that looms ahead. Will Alec still be in her life in the future? Why does Johnny, a co-worker seem to dislike her so much? How is she supposed to maintain the balance between normal people and the gifted if she must hide her secrets?

Like salt in a wound, Kat faces the sting of betrayal of the worst kind. Will she ever get over it? The last person she ever expected to lend her a shoulder shows up at in the right place at the right time and Kat fights the desire of her attraction to the Johnny. Just when she is ready to fall, heart, line and sinker, she is betrayed again and she thinks she has finally found the elusive identity of the Equinox. Is she correct or will she be proven wrong, dead wrong?

The magic in Apollo Beach owes its existence to the magic in K.K. Allen’s heart, mind and soul as she brings us even further into the turmoil that could change the world forever. With absolute brilliance, Ms. Allen has unleashed teen insecurity, angst, heartbreak and a beautiful coming of age story all enfolded in her very own fantasy world. Was she finished there? Nope, she added the loyalty of the magically gifted community to stand for what is right, even as they are picked off, one by one by a mysterious intruder. Smell the salt air, feel the waves and swim with the creatures of the sea, then tell me K.K. Allen doesn’t have her own magic in her words as each scene comes to life and the battle looms ahead. Yet, even the explosive discoveries were nothing compared to Ms. Allen’s brilliant finish, yep, pure entertaining magic. A YA series not to be missed! Not a young adult? No problem, I don’t think they are checking IDs at the bookstore.

I received this copy from K. K. Allen in exchange for my honest review.

Email ThisBlogThis!Share to TwitterShare to FacebookShare to Pinterest
Labels: K.K. Allen, own, YA urban paranormal