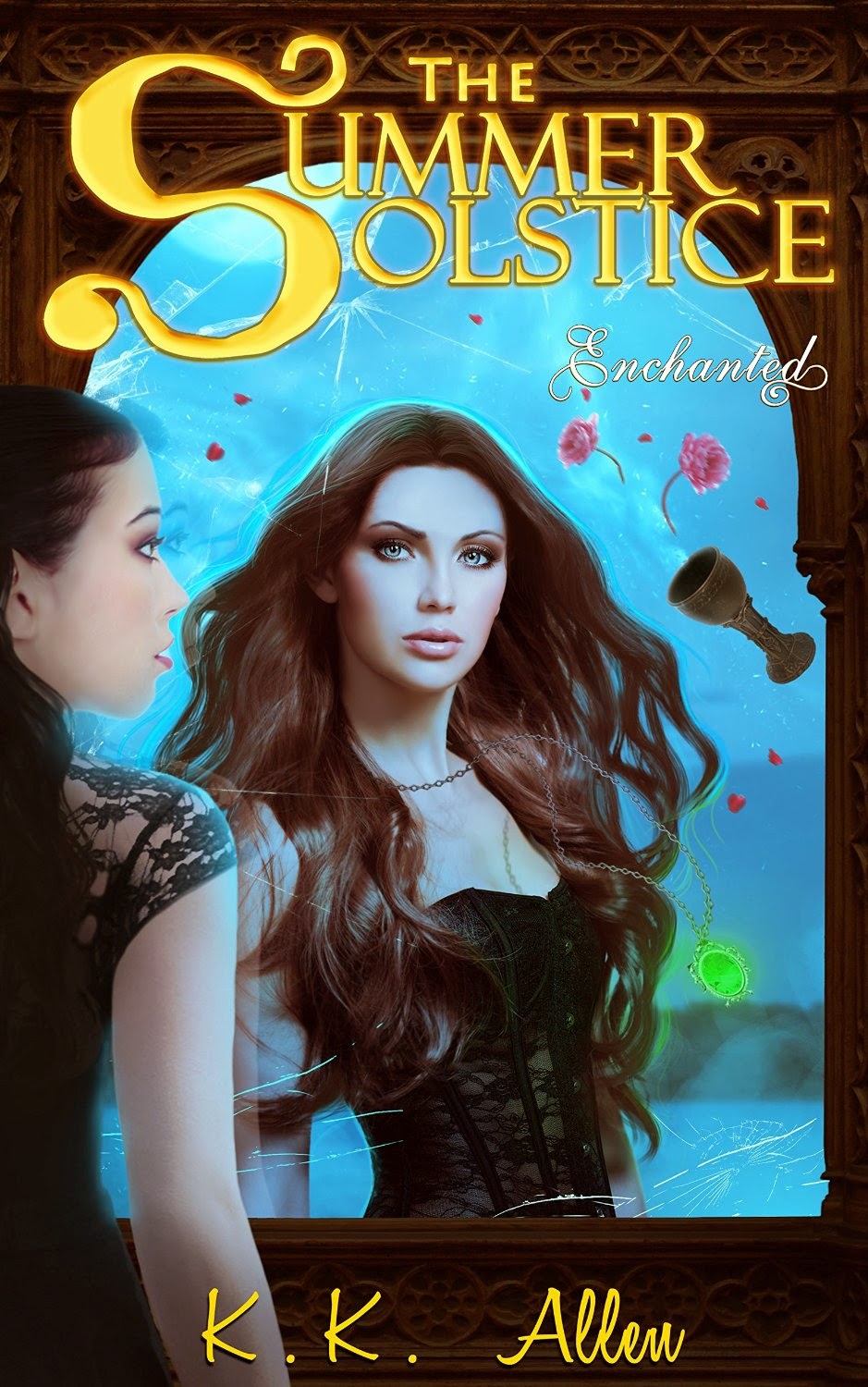 After Katrina "Kat" Summer’s mother dies a mysterious and tragic death, Kat is hurtled into life at Apollo Beach. Her estranged and cryptic grandmother Rose fills Kat with legends of her Ancient Greek Ancestors from which the Summer family descends. Kat’s world begins to unravel as secrets from her heritage are exposed – secrets that her mother purposefully concealed.

Leading to her birthday, the day of the Summer Solstice, Kat becomes frightened when enigmatic visions and disturbing dreams haunt her. When her visions become reality, her fear turns to terror as powerful forces threaten the lives of those around her.

Amidst the turmoil, Kat meets Alec Stone, her gorgeous neighbor, who becomes her sole solace in an evocative world of mythological enchantment and evil prophecies that lurk around every corner…

My Review
The Summer Solstice: Enchanted By K.K. Allen

Yep, the literary world is full of young adult urban fantasy, yet each author casts their own magic on their work and K.K. Allen must be a master spell caster because her world, her characters and her words are enchanting from start to finish. The Summer Solstice doesn’t follow a straight and narrow path, Ms. Allen has woven link upon link into a tale of fantasy and make believe and finished off by gathering each link together perfectly.

Katrina Summer’s only had her mother, who kept her as isolated as possible. She never knew her father, never knew she had a grandmother, and never really knew anything but life with her mom. Then the most horrific thing happens, her mother mysteriously dies and Katrina’s world will never be the same. Sent to the grandmother she never knew, Kat must try to fit in where she isn’t sure she is wanted or even belongs in Apollo Beach, Florida. Kat is having terrifying visions, are they the result of stress and grief or have her grandmother’s strange tales of Kat’s ancestors seeping into her thoughts as she sleeps. What is her grandmother trying to say? Do Kat’s dreams have a meaning? Are they future visions that could come to pass? On her sixteenth birthday, the day of the Summer Solstice, her visions come to life in a nightmare of epic proportions and Kat must accept who and what she is, as well as her place in a world of enchanters.
When she meets Alec, her life becomes even more complicated, as she must keep her gifts to herself, because who would believe her anyway? One slip of the tongue and the lives and safety of the magical community around her could be in peril, but how can she know what to do or who to trust when no one will tell her the entire story? If she is old enough to carry this power, she is old enough to find out what is going on, one way or another. But is she able to control what she can do without harming others or will anger consume her ability to keep a tight rein on her gifts?

All Kat wants to do is to fit in, to find a new place for herself in this strange and enchanting world, but is it even possible? She now has to contend with being the leader’s granddaughter as well as the angst of high school, thank goodness for Alec, but will he be her rock against the avalanche of change Kat is undergoing, even if she can’t tell him about herself? When a beach party goes up in flames, even Katrina’s “help” turns into a disaster that nearly costs her her life, and all she remembers are a pair of eyes and strong arms. Another vision? A dream? An omen of things to come?

I’m in for however long this series goes! K.K. Allen adds a special spark that ignites her readers’ imaginations as each scene rolls past, colorful and vividly described. You may even feel the sand between your toes, the taste of saltwater and rush of that first kiss as Ms. Allen waves her magic pen across each page. Even her characters come to life, from the distant and seemingly aloof to the charming, Katrina and her cast almost walk off the pages. When you hear the words new, different, magical, or must read, they may be talking about K.K.Allen and The Summer Solstice.

I received this copy from K.K. Allen in exchange for my honest review.

Email ThisBlogThis!Share to TwitterShare to FacebookShare to Pinterest
Labels: K.K. Allen, own