Rebecca Scarberry & JUMPER are BACK with an Awesome Giveaway! 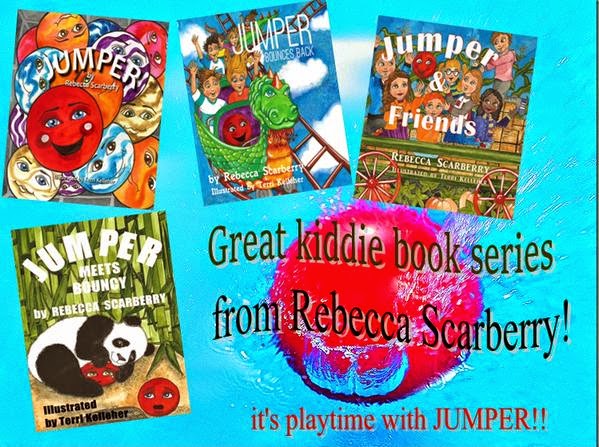 Start 'em Young! Make a Reader out of your Child!
Rebecca Scarberry is here to HELP! 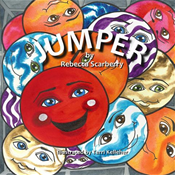 Jumper is a red beach ball, trying to escape from a toy store. He wants to find a swimming pool and Carnival Castle. Join in the fun as Jumper tells you all about his adventures away from the toy store. This book was written to be read to four-year-olds. Due to it’s length, you might choose to read a little to them each day. Eight-year-olds are able to read it without any problem. Many first and second graders have enjoyed this highly original, action packed, book when it was read to them during the library ‘story time’. This book is in ebook format and paperback.

Jumper Bounces Back
Jumper’s adventures continue after his escape from Little Tykes Toys & Bikes. He’s a big friendly red beach ball that children love. Join in the fun as Jumper tells you all about his summer escapades. With the help of Mr. Wind, he meets many new people and the fun is non-stop. This is the second book in the Jumper series and it has a bonus coloring page. 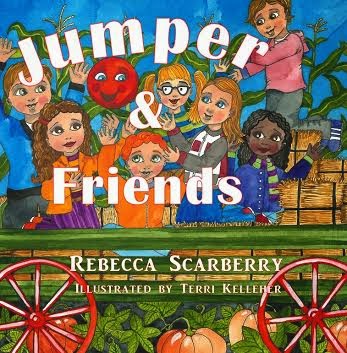 Jumper and Friends
Jumper, the friendly talking red ball, goes on more great adventures with his owner, Tony Thompson and Bouncy Brianna, Emily’s red ball. They both experience new things like tubing, sailing, and Jumper has a wonderful Christmas.


This and all the books in the Jumper series are designed to be read to age four through seven over several sittings. They are good first chapter books for age eight and nine.

Discover whether or not Tony gets Jumper back from Emily. Without a doubt Jumper finds himself in many unpredictable situations, and he finally introduces himself to Emily’s red beach ball, Bouncy Brianna.

Children will laugh, and rejoice when they read all about Jumper’s fun-filled summer days at Woody’s Day Camp, the zoo, and many other places. 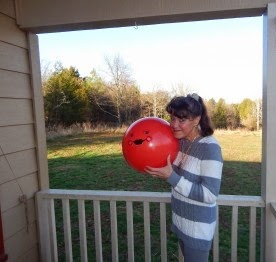 Rebecca Scarberry was born and raised in Southern California. She now lives on a very secluded non-working farm in the Boston Mountains of Arkansas with her husband and five cats. She has devoted her time to writing fiction since 2009 and has self-published seven books (four different genres): Messages from Henry (young adult mystery), Rag Doll (adult psychological thriller/crime drama), Jumper series of illustrated children’s picture books, and Where Love Takes You (transatlantic romance, written in collaboration with author, Francis Potts). Many children asked her to try to get Jumper made into a television animated cartoon series. Therefore, she has also written the script and submitted it to PBS (Public Broadcasting Service). She is currently writing a crime drama novel, set in California. It will have a major twist she’s somewhat famous for.

How the Story Line for my Jumper Books Came About:

In June of 2013 my husband, Rick was driving down a busy city street, not far from a small general store. It was a very windy afternoon. When I looked out the passenger side window I saw a big red beach ball rolling along the curb next to our vehicle. The wind had blown the ball out of a large wire container, in front of the general store. It continued rolling next to our vehicle for a quarter of a mile. When Rick saw the ball he told me I should write a story about the ball. I thought about this for two weeks and decided to write book one. Children, age four and up seemed to like it so much, I decided to write three more.


Watch this amazing Video Narrated by Jessie B. Tyson!

Here's YOUR chance to practice enchanting your child with Jumper's Tales!
Go Ahead, practice a few times!
“Hi! I’m Jumper, a big friendly red beach ball. I’m the friendliest, bounciest ball you’ll have the pleasure of owning. Others call me ‘The Red Ball’, but Jumper is my real name.
Ever since I can remember, I’ve wanted to go to an amusement park where they have rides. I’ve heard many children talk about rides where they glide, twirl, and fly through the air like a bird. They called it Carnival Castle. If I could jump out of my enclosure, I might find a way to get to this park.
I lived in a large toy store called Little Tykes Toys & Bikes. I was inside of a large wire container with many other balls. I was the only red one. The others had two colors, swirled together. They were red and pink, orange and yellow, purple and white, blue and white, and brown and white.
One morning, before the store opened, I looked through the large front windows. The trees, across the street were tilted sideways.
I got excited. Could this be the day I jump from the wire container? I would have a chance once it was rolled outside, in front of the store.
That would be so much fun!
Once the bin was outside, I could feel the other balls jiggle. I got worried they would wedge me in so tightly, I couldn’t jump out.
“Mr. Wind!” I shouted. “Hurry! Blow this way before I get stuck.”
The trees, across the street bent more and more towards the ground. WHOOSH! I jumped right out of the bin. I bounced past two cars and into the street.
I saw the streetlight change from green to yellow, and it was at that moment one car, headed right at me, increased in speed.
Suddenly I heard a loud screeching noise. Once I rolled out of the way, I looked back and saw a woman driving the car. She had gray hair, thick glasses on and her mouth was open in the shape of an o. I wanted to scream for her to stop, but whenever I talked, humans never seemed to hear me.


*Think about it-Summertime, Bedtime, Anytime- You can share books with a child- and before too long, they are reading and you have more time to read, too!*

Well? Ready to be the best friend a child's imagination has ever had?
Rebecca is offering
3 Complete sets of eBooks!
Three winners will EACH receive a four eBook set.
International where allowed
a Rafflecopter giveaway
Posted by Dii at 12:05 AM