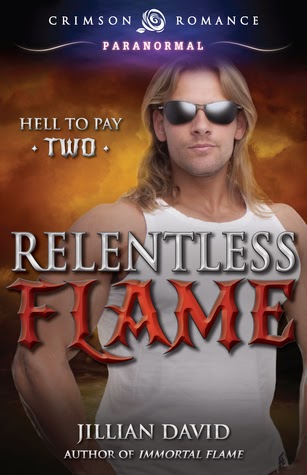 Immortal. Colossal. Suave. Indebted killer Dante Blackstone has the world at his feet. Every vice, any desire, is his for the asking—until he finds the one person he cannot have: one sweet, diminutive woman who could bring about Dante’s destruction.

Despite her supernatural ability to heal others, a devastating act of evil has left Hannah Miller broken in body and spirit. As she rebuilds her life while on the lam, a not-so-chance meeting with Dante chips away at the walls surrounding her fragile heart. But before their fledgling love can take flight, Dante’s boss sends an evil minion with one mandate: Eliminate Dante’s new reason to break his eternal contract.

As they fight to survive, Hannah’s amazing gift gives Dante one chance to save them both from the vicious minion. How can any love survive eternal hell and annihilation?

The answer lies in Dante’s inferno.

Dante is sin personified, from his massive Adonis bulk to his mesmerizing face and eyes. He turns women into gushing fangirls, collecting panties and phone numbers the way others collect baseball cards. He is also immortal, paying off a debt to the devil who owns his soul in return for an answered plea long ago ad he is on a mission to feed evil. Dante NEVER gets involved with anyone, too much pain, too much chance for loss, but he is always up for a few fun and games moments, but even that can get boring. Imagine his surprise when a timid and sweet young shop girl rebuffs his infamous charm. Its GAME ON to win the adoration of one Hannah Miller! What Dante discovers under the plain clothes and wallflower countenance is a bright and witty woman who is desperately trying to stay under the radar of evil.

She was just supposed to be his target, not a gifted woman who is turning his knees to jelly. But Hannah’s fear of discovery of both herself and her brother far outweigh any chances she would take for romance, unless Dante can convince her otherwise. When she demonstrates her power to heal others, she becomes the target from one of hell’s minions and it is up to Dante to save her, no matter the cost to himself. Will he be her savior, as well as her lover or will they have to save each other? Her greatest betrayer is the one she has worked so hard to protect, will this break her spirit and her will to live or is there some magic between Hannah and Dante that proves stronger than the legions of Hell? Is it love?

Relentless Flame by Jillian David is hotter than blazes, from start to finish as one over-inflated ego meets the one person who humbles his heart. If you are a fan of great bantering dialogue, trust me, its here! Do you love characters you can despise? Once again, Ms. David weaves a tale of evil vs good, freedom vs enslavement and the most powerful force of all, love. Get ready to settle in ad watch her work her magic, once again as she kicks all kinds of obstacles in the way for this couple to try to overcome, but has she tossed out one too many?

I received an ARC edition from Jillian David in exchange for my honest review.