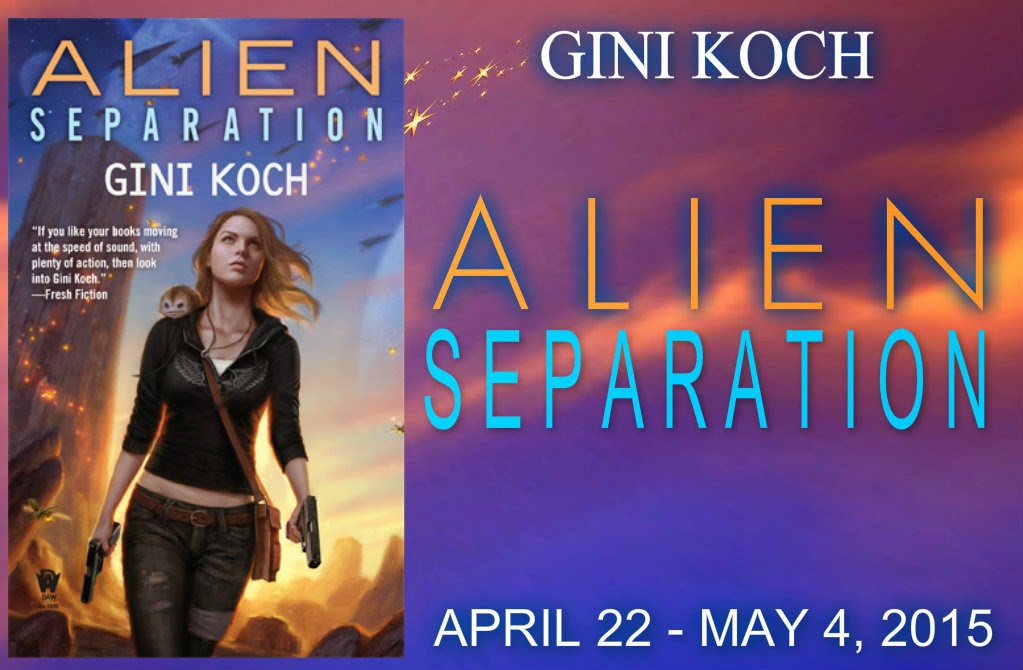 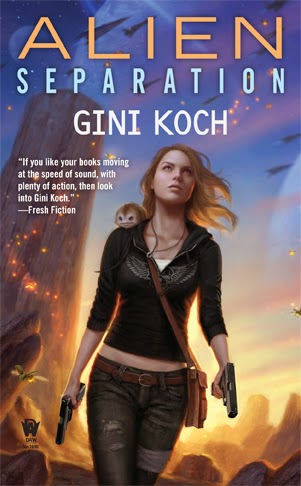 The Mastermind has finally been identified, but before Jeff and Kitty Katt-Martini can take him down, they, their daughter, Jamie, Charles Reynolds, Paul Gower, Christopher White, and several others are zapped out of their solar system and into another.

Landing in scattered groups on various areas of Beta Eight in the Alpha Centauri system means getting the team back together will be a major issue. But it’s only one of the challenges they’ll face. Kitty and Company have to forge alliances with the wide variety of sentient natives on the planet while plotting to create a civil war and overthrow the king—who just may be a clone of one of their bitterest enemies, Ronaldo Al Dejahl.

Of course, to do this, they have to overcome an assortment of dangerous obstacles, protect a group of refugees, take mind reading lessons, and seek out unexpected new allies as they journey to the Centerpoint of the World.

And once they reach the All Seeing Mountain, new issues and surprises await. Because there’s more than a small war going on—they’re in the midst of the Alpha Centauri Civil War!


Tome Tender Hot Seat
Gini Koch is apparently an old pro at this, so she had to dig deep to find some (HOPEFULLY) new chapters in the open book that is GINI KOCH

Q: Please tell us three (or more) things about you that are not found online. They can be something that happened as a child, something funny, silly, embarrassing at the time, serious, your least fav food, fav food, a bad habit, a romantic moment (please, no graphic details :D)

A: Wow. Um…I’m honestly pretty much an open book. I don’t really believe in keeping skeletons in the closet, mostly because if I’ve already told the world whatever “it” is, then “it” cannot be used to control me. And I’ve done a few of these “tell us what we don’t know” things by now and, dang it all, I’ve already told what no one knew! I feel such a fool for not saving SOMEthing good for just this occasion. But, to show willing and all that, I’ll do the best I can, but if someone already knew this, it’s not my fault! Or, well, it is, but…um, onward and here goes!

1. I claim to never sleep but it’s not true – I just don’t sleep conventional hours, so it seems like I never sleep. I don’t get enough sleep, to be sure, but I do get some. In fact, I adore sleeping, it’s one of my favorite things in the world to do, ever and always. (Most of my favorite things to do can be done in bed, btw, but that’s a whole ‘nother post…)

2. Every story in my humor collection, Random Musings from the Funny Girl, is true. The names have occasionally been changed to protect the guilty or because I blocked them out. (I say this all the time, but I’m repeating it here because I get the distinct impression that almost no one believes me.)

3. One of my favorite alcoholic beverages is a Pimm’s Cup, in part because they’re delish and in other part because the first time I had one was at the Napoleon House in New Orleans and every time I have a Pimm’s Cup I’m back in NOLA, in the Napoleon House, loving being there. I love most of the places I’ve been to, honestly, but NOLA is one of my all-time faves and while I can’t get there nearly as often as I’d like, having a Pimm’s Cup means I’m there in spirit. (Oh look, it’s 5pm somewhere…time to have the hubs make me a Pimm’s!) 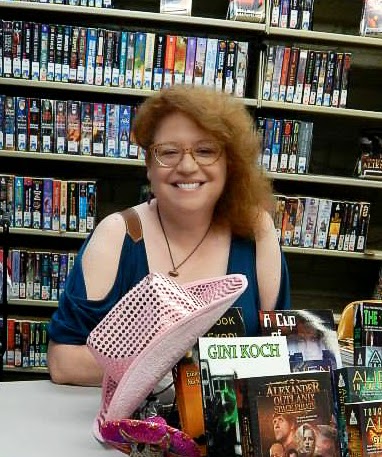 Gini Koch writes the fast, fresh and funny Alien/Katherine “Kitty” Katt series for DAW Books, the Necropolis Enforcement Files series, and the Martian Alliance Chronicles series. Touched by an Alien, Book 1 in the Alien series, was named by Booklist as one of the Top Ten Adult SF/F novels of 2010. Alien in the House, Book 7 in her long-running Alien series, won the RT Book Reviews Reviewer’s Choice Award as the Best Futuristic Romance of 2013.

As G.J. Koch she writes the Alexander Outland series and she’s made the most of multiple personality disorder by writing under a variety of other pen names as well, including Anita Ensal, Jemma Chase, A.E. Stanton, and J.C. Koch.

Gini also has stories featured in a variety of anthologies, including the Unidentified Funny Objects 3, Clockwork Universe: Steampunk vs. Aliens, and Two Hundred and Twenty-One Baker Streets anthologies, writing as Anita Ensal, in The Book of Exodi, Love and Rockets, and Boondocks Fantasy anthologies, and, writing as J.C. Koch, in Kaiju Rising: Age of Monsters, The Madness of Cthulhu, Vol. 1, and A Darke Phantastique anthologies. Gini will also be featured in the first book in an X-Files anthology series, X-Files: Trust No One, as well as in the Temporally Out of Order, Timeless Tales, Kaiju Rising: Age of Mech, Unidentified Funny Objects 4, and Out of Tune 2 anthologies, all coming in 2015. 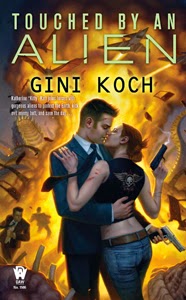 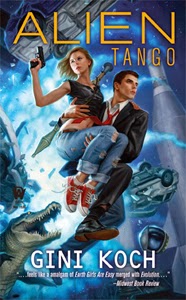 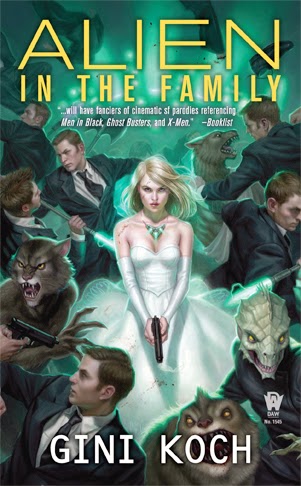 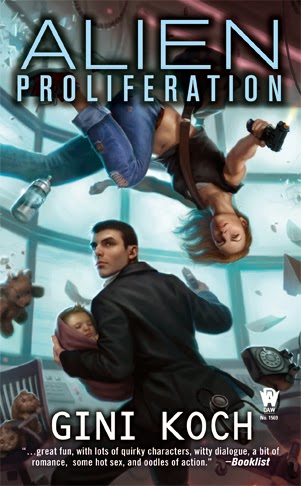 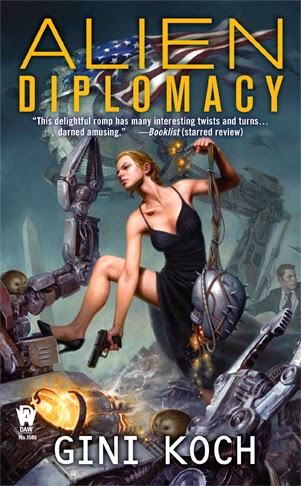 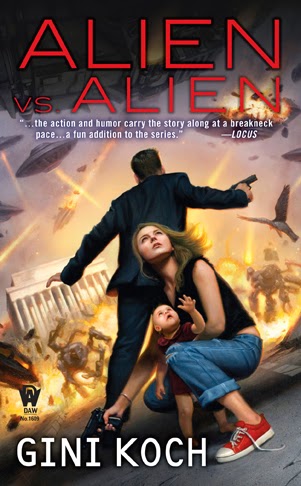 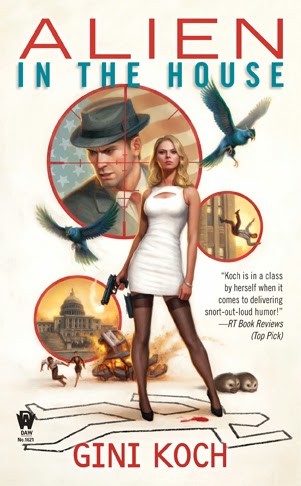 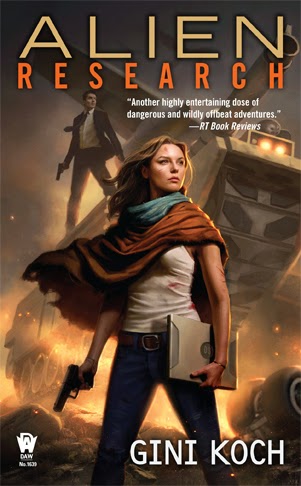 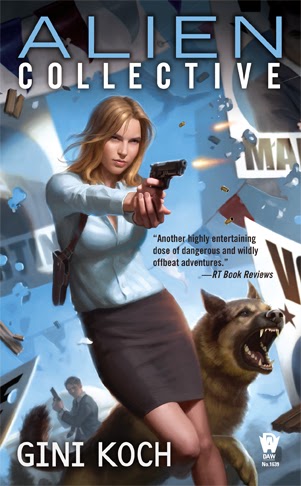 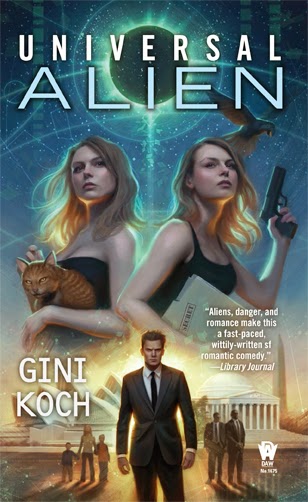 One lucky winner will walk away with THEIR choice
of one PRINT copy of ANY of the first ten books in the Alien series – Touched by an Alien, Alien Tango, Alien in the Family, Alien Proliferation, Alien Diplomacy, Alien vs. Alien, Alien in the House, Alien Research, Alien Collective, or Universal Alien.
(For readers new to the series, we strongly suggest you choose Touched by an Alien :-D)
Contest is open internationally.
Ends May 4, 2015
a Rafflecopter giveaway
Posted by Dii at 12:00 AM