Converge by Rebecca Berto (The Rental #1) 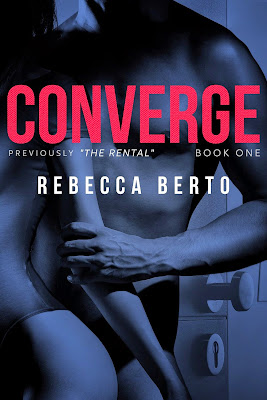 Rick Delaney is off-limits. Vee Wyland knows this. She knows it because he’s her boyfriend’s older brother.

But he’s sex in the form of a six-foot hottie she can’t ignore, and when her world lies in tatters at her feet, she can't resist following him into the underbelly of the secret establishment he works for.

The Rental is the last place Vee ever thought she’d find herself, but she's drawn to the money, the decadence of seduction, and despite the company’s no fraternization policy, she can’t deny the one thing she wants most: a life of sexual decadence with the one guy she can’t have.

Converge by Rebecca Berto (The Rental #1)

Vee is a free-spirited, wild child who is coming out of her shell and sexual experimentation can be both profitable and just edgy enough to fulfill her dreams. Now, if she could only get Rick to participate, but it is breaking all of the rules, until it becomes the best part of her new job.

I received a copy of this book from the author as a winner in a giveaway.