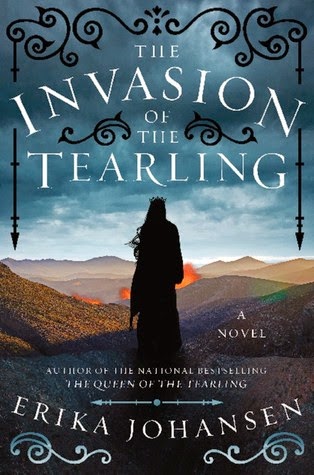 With each passing day, Kelsea Glynn is growing into her new responsibilities as Queen of the Tearling. By stopping the shipments of slaves to the neighboring kingdom of Mortmesne, she crossed the Red Queen, a brutal ruler whose power derives from dark magic, who is sending her fearsome army into the Tearling to take what is hers. And nothing can stop the invasion.

But as the Mort army draws ever closer, Kelsea develops a mysterious connection to a time before the Crossing, and she finds herself relying on a strange and possibly dangerous ally: a woman named Lily, fighting for her life in a world where being female can feel like a crime. The fate of the Tearling —and that of Kelsea’s own soul—may rest with Lily and her story, but Kelsea may not have enough time to find out.

The Invasion of the Tearling by Erika Johansen

Original, I thought this as a dystopian fantasy, but The Invasion of the Tearling is about to take a genre twist that will shock us all. The Invasion of the Tearling is definitely more of a scifi read, you heard me right its science fiction. The plot also divides between flash backs or forwards to another character besides Kelsea. These flashbacks come as visions Kelsea is having of a woman named Lily from the pre-crossing world.

For Kelsea, there is a battle coming and Kelsea must prepare for a foe that is far superior in numbers and brutality. Does the key to their survival lie in understanding this other world Kelsea keeps seeing in her visions?

Lots of people are trying to control Kelsea but she doesn't seem to care, especially what the upper “class” seems to think. There are lots of power plays and betrayals lying in wait for Queen Kelsea to traverse...leaving us with the mother of all cliffhangers, waving a blood flag at the end.

This story is riddled with dark and desperate acts of survival with brutal and gory content, which will be upsetting to some readers.

Bottom line for me, I love the concept Johansen created and the main storyline, I just really wish their was more closure on certain plot issues.

I received this ARC copy of The Invasion of the Tearling from Harper in exchange for a honest review. This book is set for publication June 9, 2015.