Once and Again by Elisabeth Barrett (Return to Briarwood #1) 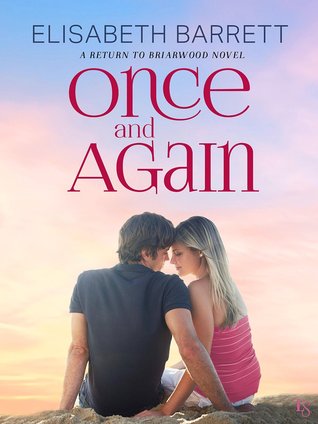 For readers of Shannon Stacey and Susan Mallery, the heartfelt new Briarwood series begins with a tale of forbidden love, broken promises, and second chances.

Growing up in Eastbridge, Connecticut, Carolyn Rivington was a young debutante who did whatever her parents asked. So when her father demanded that she break things off with the boy from the wrong side of the tracks or else, she did. Now Carolyn’s family is deep in debt. She’s no longer a member of the Briarwood Golf and Yacht Club, she’s an employee. And the tanned, tattooed, dangerously handsome stranger who saunters into her lobby isn’t just her new boss . . . he’s also her first love.

The last time he saw Carolyn, Jake Gaffney was in the back of a police cruiser, handcuffed and humiliated. But seeing her again stirs other memories: a blanket on the beach, the moon above their heads, and the most expensive bottle of wine he could afford. Now the tables have turned. As a real-estate magnate and Briarwood’s new owner, Jake doesn’t have to answer to anyone. But now that he’s back home, he’s finding it hard to live down his old reputation.

Before they can move forward, Jake and Carolyn must face their pasts. But it’ll take more than sizzling chemistry for them to heal old wounds and return to the love they once shared.

Once and Again by Elisabeth Barrett

Carolyn was the rich country club girl who lost it all, ending up working at the very country club she use to belong to.

Jake was the boy from the wrong side of town, who worked at the country club until Carolyn's father had him arrested and driven away from his daughter. Now he's back, a big wig on the real estate scene, purchasing the country club and becoming Carolyn's boss.

Carolyn's strength of character was a major plus for the story but that seems to vacillate, which seems totally out of character, when things start to turn around for her.

Once and Again was a story of bitter sweet reunions, second chances and making the most out of what life hands you. Overall, I found I liked it. It was an endearing and a cute contemporary romance.

I received this ARC copy of Once and Again from Random House Publishing Group - Loveswept in exchange for a honest review. This book is set for publication July 14, 2015.