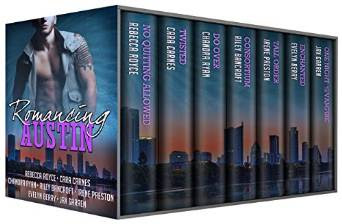 No Quitting Allowed, Rebecca Royce
One last assignment and then Lana is quitting her job, quitting Austin, and moving on with her life. Until Jake stumbles into her and changes the direction of her whole world.

Twisted, Cara Carnes
Caleb "Colt" Douglas agreed to close out Twisted Delirium's sold out world tour with a gig at SXSW for one reason--win back the woman he left behind.

Do Over, Chandra Ryan
When life offers Juliana a fresh start, will she follow her heart or play it safe?

Consortium, Riley Bancroft
Record exec Holt Michaelson married the enigmatic Chloe to keep his assets safe from a vindictive competitor, but after a fiery encounter with his new wife, he's determined to claim her as his own, body and soul.

Tall Order, Irene Preston
Dylan made the worst mistake of his life when he chose his career over Aston, but tonight he'll take a risk on Aston even if it's too late.

Enchanted, Evelyn Berry
Stripped of her magic, fairy princess Aurora is torn between her duty to her imperiled family and to a brilliant musician who holds the key to their freedom...and her heart.

One Night with the Vampire, Jax Garren
Tonight Alex will finally possess the woman he's craved, but Sofia's dangerous family secrets threaten to tear them apart.

Romancing Austin, an anthology of melt in your mouth romances is like that Sampler box of decadent chocolates, inside that outer shell is a secret surprise flavor, just waiting to be savored. Here is a reader’s chance to sample each author’s unique style, their take on romance, be it paranormal, M/M or just two people who feel the sparks of passion. Leave to an over-the-top Rock Star to throw a party in his Austin penthouse that gives Cupid free reign for target practice.

A wonderful surprise for readers is that each tale of love, no matter how short feels right, feels like the beginning of something special, hot and is filled with characters that you want to see find, rekindle or just plain fall in love. Seven couples, seven tales, tempers may flare, old wounds need to heal, and who knew??? Austin even has paranormals gracing its streets!

There wasn’t a story I did not like, the heat is there, the passion is igniting and each story owes its atmosphere to the strength of its author. So to Riley Bancroft, Evelyn Berry, Cara Carnes, Jax Garren, Irene Preston, Rebecca Royce, and Chandra Ryan, I have to say, you know how to write! Some authors I am familiar with, some are new to me, but for sure, every single one of them are on my reading radar now.
Face it, it is that time of year when things get a little busier, time seems to run short, so what better way to take a brief rest than to watch Cupid sharpen his aim, over and over!

I received a review copy in exchange for my honest review.