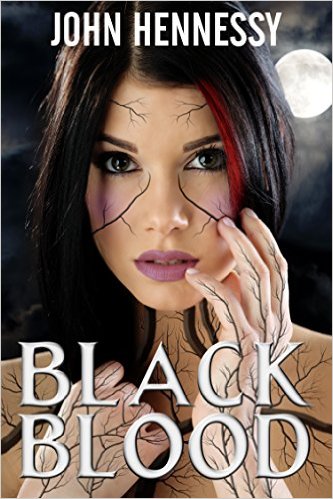 Vampires, werewolves, witches, magic—no one in the Sanctuary, home of the survivors of the nuclear apocalypse, believes in such imaginary creations, including Aberdeen Dareday. That is until the day Abby wakes up with black veins bulging under her skin. The day she learns everything she’s been told about the world is a lie. Forced to flee humanity’s last refuge because of her abnormality, and the corpses left in its unexplainable wake, she finds herself on the run in an entirely new world. A world in which darkness reigns, full of supernatural creatures bent on her execution.

When all seems lost and facing certain death, Abby is saved by Ash, a quiet yet striking young man who shares her black blood, and her mysterious powers. After Ash reveals a clue regarding an old witch, they head north to her home in Montana, determined to beat the piling odds and obtain the answers they seek. Now hunted by everyone from vengeful humans, to the alluring vampire Prince of Texas, to the Lord Alpha of the largest werewolf pack ever to exist, Abby must discover what is so special about her black blood if she hopes to live and fight another day, but time stands against them as their enemies close in for the kill.

Black Blood is a spellbinding cross-genre mutation unlike anything you’ve ever read, weaving paranormal fantasy in a post-apocalyptic world.

After being some of the few survivors of a nuclear apocalypse, the members of Sanctuary, including Aberdeen Dareday should have been able to believe in anything. But some strange mutation has overtaken Abby and she is becoming one of the monsters that she thought only lived in fantasy tales. Vampires, werewolves witches and magic are real, all she has ever known is a lie and she is becoming one of them. Escaping to the outside world, she discovers nothing is as she was taught, good and evil come from within the heart and soul and not from the color of the blood in one’s veins. Will this be a new beginning for her or the beginning of the end? Only one being has willingly stood by her side to protect her and teach her the ways of the world, but will Ash be enough? There is something “special” about Abby’s black blood and everyone wants it, or her, or the powers it possesses.

Who knew so many themes and genres could blend so well in such an intense and frightening tale? Black Blood by John Hennessy is a step through a portal to a world in turmoil, devastated by its own devices and ill-prepared for the backlash of change. John Hennessy has put everything but the kitchen sink into this tale and has turned out a riveting piece of work! From the innocence of Ash to his brute strength and teen-like response to Abby’s beauty, as well as Abby’s knowledge of what Ash is feeling, it looks as though young romance may be budding in a world with little to be happy about. Mr. Hennessy’s use of twists and turns includes surprises that may include aliens! Are the lies of Abby’s life are too unbelievable to accept or are they another piece of the tangled tale laid before us with confidence by this author? Rest up, this one needs full concentration to appreciate every page! Sometimes a little more than YA, but definitely pretty realistic thought processes going on, even after an apocalypse!

I received this copy from John Hennessy in exchange for my honest review.