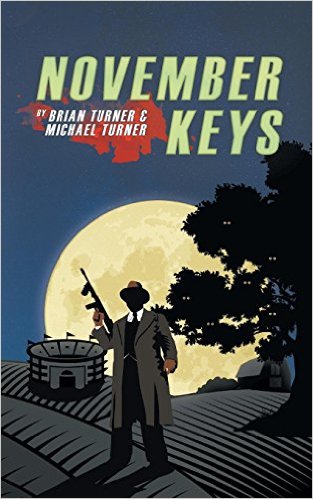 November Keys Inhabitant
"If we had known, we would not have sold the club. I admit we succumbed to greed but we did not realise we were putting our heritage at such risk. They did take the team to great heights but the consequences were disastrous."

American Gangster
"They asked for what they got. Did they seriously think that we were interested in some run down hick football club?"

November Keys Inhabitant
"Our benevolent buyers turned out to be ruthless. We had never experienced a murder in our village before. Not unless you include Cheryl's cooking."

American Gangster
"What did you expect? They had something I wanted. Something life changing. Do you think I was going to get it by playing peek a boo?"

November Keys Inhabitant
"Although we celebrated Harvesting Leaf Day and talked about the creatures in the tree, we did not actually expect to see them."

November Keys,a quaint village that was ready to sell its soul to the Devil for hastily promised riches. However, when the Devil buys he expects to collect. A very funny tale of greed, gangsters and things that go bump in the night

Is it a comedy, a thriller, a tale of gangsters moving in on an innocent town, or is there a touch of magic in the air around November Keys that makes it an extremely unique type of read? Seems that authors Brian and Michael Turner had a good time writing this imaginative and chaotic tale! A small and old-fashioned English town is made an offer they cannot refuse by a powerful and shady “businessman” wanting to purchase their unknown football(soccer) club, rundown, makeshift arena and the lands all around it. One by one the town falls in love with the idea, could it have been the personal visits made by this mysterious buyer? Come to think of it, why would American gangster want an English football club?

Only one man holds out, and he is key to everything, but why? He’s a farmer with a small business making a very special honey concoction that seems like some magical beer that drinkers crave. …And then there is the old oak tree, a legend in the town, it must never be cut down, so do the gangsters listen? Noooooo and the tale really begins from here when one former resident, an eccentric billionaire shows up to save the town, the tree and the legends and myths surrounding November Keys!

Quirky, a little over the top and certainly a creative piece of writing, Brian ad Michael Turner have taken a little hearted approach to deceit, danger, drugs and the preservation of an old towns legacy. With quirky characters, a chaotic timeline we continually pass across and the quaint descriptions are light and easily enjoyed; just remember to leave your disbelief at the door along with your need for order. Bring on your own sense of crazy as you follow the twists, turns and confusion as greed and glamour blind become incentives. More entertainment than grit, makes you wonder how these people have survived.

I received this copy from the authors in exchange for my honest review.