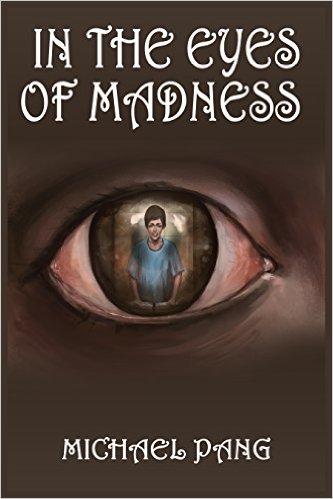 In the Eyes of Madness
by Michael Pang

A near tragic incident at the hands of his psychotic mother left Declan Peters alone and with so many questions.

Years later, Declan is determined to find a way to be closer to his mother and takes a job at the institution where she's being held. That fateful decision will be the impetus for a chain of events so terrifying that Declan will question his own grasp on reality.

What he finds will be more horrifying than anything he's ever experienced and more dangerous than anything he's yet known. In a place, rife with demonic possession and sadistic beings, will Declan finally be able to find the answers he's longed for before its too late or will he succumb to the evil forces that inhabit the institution and all who live there?

Have you ever looked into eyes filled with madness? Have you felt the fear, the pain for having done so? Declan has, and they belonged to the woman who was supposed to care for and protect him, they belonged to his mother. Instead of becoming a twisted soul, himself, Declan has grown into a young man longing to be close to his mother, to reach into the world her mind is locked away in as she sits day after day in an institution. What happens becomes more of a nightmare than Declan could ever conjure on his own. Are the clinically insane possessed by demons? Will Declan be trapped in an eternal nightmare or will he break free before he, too in engulfed in insanity?

Michael Pang’s In the Eyes of Madness is a twisted journey into the unknown, the unbelievable and the terrifying, hang on tight, as this tale unfolds in all of its stark detail. With characters that are likable and sometimes quirky, Mr. Pang provides ample support for his main character, Declan, whose generous heart and longing to reach out to his mother could be his very undoing. Dark, edgy and full of sharp angles, the path we take draws on old beliefs that insanity is really demonic possession, could it be that this is what has happened here? The feeling of dark evil comes alive as the tale begins to heave in deep breaths, unsettling and brilliant in its execution by the author.

It is the perfect time of year for dark tales of the unknown and Michael Pang has written a must read gem that has risen from the cauldron of Halloween perfect reads in the never-ending battle of good versus evil. Makes you wonder what else Michael Pang has brewing that will raise the hairs on the back of your neck..

I received this copy from Michael Pang in exchange for my honest review.