A Talent for Trickery by Alissa Johnson (The Thief-takers #1) 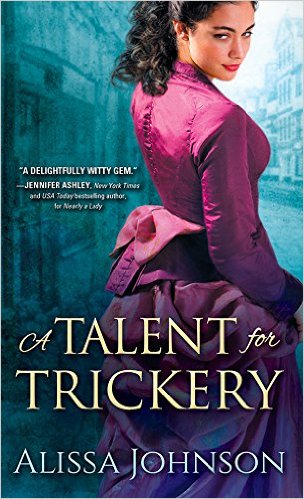 A Talent for Trickery
by Alissa Johnson

The Lady is a Thief

Years ago, Owen Renderwell earned acclaim—and a title—for the dashing rescue of a kidnapped duchess. But only a select few knew that Scotland Yard’s most famous detective was working alongside London’s most infamous thief…and his criminally brilliant daughter, Charlotte Walker.

Lottie was like no other woman in Victorian England. She challenged him. She dazzled him. She questioned everything he believed and everything he was, and he has never wanted anyone more. And then he lost her.

Now a private detective on the trail of a murderer, Owen has stormed back into Lottie’s life. She knows that no matter what they may pretend, he will always be a man of the law and she a criminal. Yet whenever he’s near, Owen has a way of making things complicated…and long for a future that can never be theirs.

A Talent for Trickery by Alissa Johnson (The Thief-takers #1)

Can the remaining member of a father-daughter team of professional thieves leave their sins behind and start over undetected as a law abiding citizens? A once famous Scotland Yard detective became a force to be reckoned with the aide of the father, thief turned informant, but that was years ago. The father is gone and it is his records and journals that bring Private Investigator Owen Renderwell to Lottie’s door. Inside those journals could hold clues to recent robberies and a grizzly death. Will Lottie hand them over to the man who was once a the embodiment of her worst nightmare but now makes her life and emotions come alive? Will his intrusion into her new life expose her secrets to a man bent on her destruction? What about the danger to her family?

Lottie is intriguing, strong and never fails to challenge Owen and he likes it. There are crimes to be solved and their prickly relationship could be perfect, except he was the law and she was the criminal.

A Talent for Trickery by Alissa Johnson is a journey back into the world of Victorian London, complete with all of the atmosphere and grace. Her characters are formidable, the plot twisted and the romance adds more depth to her tale. There is a mystery, some suspense and a killer waiting in the shadows. Not a fast-paced tale, the dialogue is very proper and one can visualize each scene, the family dynamics and the tension that threads throughout. A bit slow moving at times, but one definitely knows they aren’t in Kansas anymore.