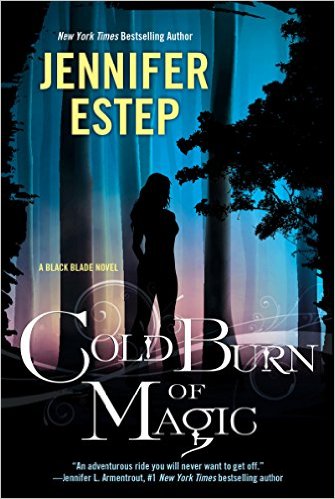 There Be Monsters Here. . .

It's not as great as you'd think, living in a tourist town that's known as "the most magical place in America." Same boring high school, just twice as many monsters under the bridges and rival Families killing each other for power.

I try to keep out of it. I've got my mom's bloodiron sword and my slightly illegal home in the basement of the municipal library. And a couple of Talents I try to keep quiet, including very light fingers and a way with a lock pick.

But then some nasty characters bring their Family feud into my friend's pawn shop, and I have to make a call--get involved, or watch a cute guy die because I didn't. I guess I made the wrong choice, because now I'm stuck putting everything on the line for Devon Sinclair. My mom was murdered because of the Families, and it looks like I'm going to end up just like her. . .

Another exciting YA series to crave! Meet Lila, one sassy, determined survivor in a town where the tourists think magic rocks, but the residents know better. Orphaned when her mother was brutally murdered, Lila has turned her back on a system that cannot be trusted and survives on her own using her wit, attitude and her prowess as a thief. Lila has Talents, but she keeps one hidden for her own safety, staying in the shadows and out of the limelight that could make her a pawn between the ruthless, ruling families of the city.

Mob wars are escalating, Talents are being abused and the heir to one of these families is the target for death. One heroic deed puts Lila on the Sinclair family payroll as she accidentally saves young Devon and his mother makes her an offer she is not allowed to refuse. Seeing this as an opportunity to get close to her mother’s murderer and seek revenge, Lila has no idea how big the hornet’s nest is that she just kicked and never intended for her heart to get in her way.

Cold Burn of Magic by Jennifer Estep is action-packed drama, excitingly fresh and filled with some of the best dialogue ever! Ms. Estep knows how to bring her characters to larger-than-life status and Lila is a perfect example of that! I found myself, loving her, wanting to share her pain, to comfort her and to stand back when she gets mad! And the mob families? Whoa, imagine the Godfather with magical talents, nasty people, very nasty people. Devon kind of threw me at first, I like him, I don’t like him, I finally get him! Suspense, tension, magic and mayhem, all at a rapid-fire pace that jumps off the pages! Fabulous young adult reading!

Email ThisBlogThis!Share to TwitterShare to FacebookShare to Pinterest
Labels: Jennifer Estep, own