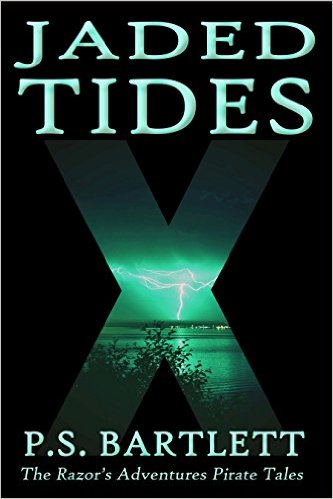 After finding love in the most unlikely of places, Ivory’s life appears to at last be falling into place. Having proven herself a force to be reckoned with, she has at last set sail for the first time as a pirate. The only problem is she’s a woman and must disguise herself in order to set foot on a ship. Being in love with her captain isn’t helping matters either and whole new set of obstacles are presenting themselves at every turn. Her brash style and tenacity, however, could prove to make her, her own worst enemy.
With a sword in her hand and her new found love at her side, Ivory Shepard is about to embark on a mission to rescue and return every young woman she can who has fallen prey to the jaded tides of the Caribbean sex trade. Armed with a secret log book she acquired from a pirate captain—who also happened to be an evil smuggler, she believes herself well prepared for the task. As she’s already learned the hard way, pirates always prove to be unpredictable and ruthless. Unfortunately for them, so is she.

Ready for another high adventure on the open seas where vast ships sail the waters filled with cargo, treasure and contraband? Welcome aboard as we set sail once again with the firebrand, Ivory, still in her disguise as Ivan. To her shock and awe, she finds love in the arms of the Jade’s captain. Rasmus knows what he is getting into with the fiery Ivory and he has vowed to fight by her side as she prepares to seek and destroy every slave ship she finds. Young females are being taken from their homes and sent across the waters in a lucrative pirate sex trade business fouling the waters of the Caribbean and Ivory is determined to stop it at any cost. But is she willing to risk Rasmus? Her identity? Her life?

P.S. Bartlett is back and she has another adventure-filled voyage to take us on. Jaded Tides is adventure, romance and history in the making as Ivory will stop at nothing to stop evil at its worst. With her own history to spur her on, sometimes Ivory acts before she thinks, but it’s her passion that brings this tale to life. She is a heroine to be reckoned with. And Rasmus? The man is a saint, honorable, brave and, let’s be honest; he loves the fire in Ivory’s heart, even when it could be at his expense.

With a rapid pace, entanglements all around and a crew that has salt in their veins and loyalty in their hearts, the humorous scenes just add to the joy of Ivory’s adventures. More fun than the Loveboat, more romantic than a seaside picnic, even the smells of the crew, the water and the bowels of a ship wouldn't make me miss taking this voyage! So hoist the sails, get your sea legs ready, we're off on another adventure with P.S. Bartlett at the helm.

I received this copy from P.S. Bartlett in exchange for my honest review.