Nightwish by Sydney Bristow (An Echoes of Eternity Novel Book 1) 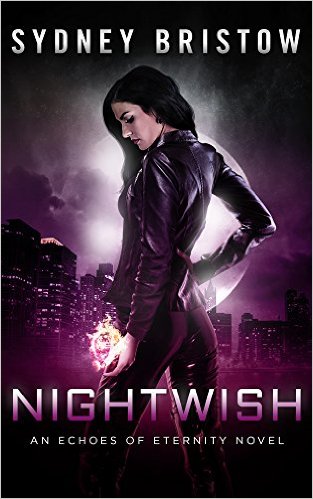 Serena Sykes just discovered that the mother, identical twin sister, and niece she never knew existed…are the last remaining witches on the planet. That is, except for Serena, who recently received her own limited, albeit wildly erratic supernatural abilities.

But her newfound family isn’t interested in helping her master those gifts. After all, Serena’s mother has been communicating beyond the veil with the first witch in their line, a sorceress named Zephora who hopes to return to this dimension and destroy an ancient curse that would unleash paranormal creatures across the globe.

To help guide her in this new landscape, Serena turns to her grandmother, an elderly woman suffering from dementia and the only vampire in existence, a man who has his own mysterious agenda. With less than 48 hours to prevent her family from triggering a supernatural wasteland, Serena must learn to control her abilities…if she hopes to save the world!

Nightwish by Sydney Bristow
(An Echoes of Eternity Novel Book 1)

Once again, rules, curses and family secrets take someone by the neck and rattle that cage of consistency they have always known. Not only has Serena found long, lost family, but she has also discovered who and what she really is. Just as her life begins that long tumble off a steep cliff, she will also face loss, danger and the discovery that she really has no idea who she can trust! The supernaturals have been dying off, or were their deaths planned? Serena, the mother, twin sister and niece she never knew are the last witches on earth, now that her grandmother, who raised her has passed on and Serena is left alone and clueless as to what her powers are, how to control them and that bodyguard, the last vampire, he took off, so she cannot count on him. Welcome to Serena’s world, welcome to Nightwish by Sydney Bristow…

The first witch in her family tree has cursed her descendants and they must bear the burden of bringing her across the veil of death. Too bad Zephora isn’t coming for tea, if she is set free; all hell will break loose as every creature of your worst nightmare could roam the earth again. And you thought your life could be a mess, Serena only has so much time to learn her powers, stop Zephora and deal with a witch of a mother and sister who are far more powerful than she. What of her niece? Is her heart as dark as the rest of them? Does she have any powers yet? Will she go over to the dark side, too?

Do you like your heroines with some attitude, spunk and true grit? Tired of the angst when the shock of learning your life has been a lie? You are going to love what author Sydney Bristow has done with Serena! Actually, you will love every character that comes from Ms. Bristow’s creative cauldron. No two are alike, some are a little quirkier than others, some are a heck of a lot scarier, but each is memorable and full of personality. Great dialogue, a race against time and a newbie witch determined to beat the odds and save the world from evil. The sands of the hourglass are running out, a love interest has just walked in and Mommy Dearest and Sister Skank are like a tag team of doom as they come at Serena from all angles, even on her own turf.

From start to finish, scene to scene, and dialogue to dialogue, I’m thinking this series is a winner!

I received this copy from Sydney Bristow in exchange for my honest review.

Email ThisBlogThis!Share to TwitterShare to FacebookShare to Pinterest
Labels: own, Sydney Bristow