Rack and Ruin by Chele Cooke (Out of Orbit Book 3) 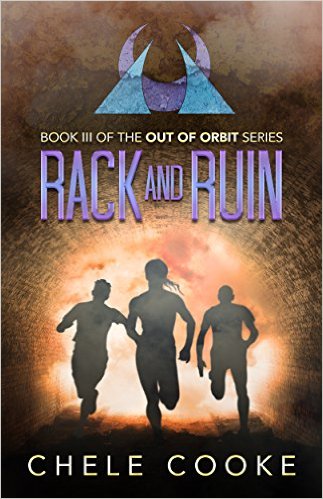 Rack and Ruin
by Chele Cooke

“You ready to break out of the cage, little bird?”

Georgianna Lennox has been released by her keeper Edtroka, who has sided with the Cahlven, a technologically advanced race exiled from her home planet hundreds of years earlier.
When Edtroka disappears, Georgianna and a group of rebel friends are forced to embark on a dangerous scouting mission behind enemy lines.
As the Cahlven’s true intentions become clear, Georgianna and the rebels hatch an audacious plan to turn the Adveni’s most powerful weapon against them — at a terrible cost.

Rack and Ruin by Chele Cooke (Out of Orbit Book 3)

Once again we are taken back into Chele Cooke’s world where friends become enemies, and enemies can become a trusted ally. The resistance fights on, Georgianna back with them. Trained as a medic, she must now hone some fighting skills or risk being easy prey for the enemy and a detriment to her team. Will it be enough when the greatest battle yet is to be faced? Once again, the unknown looms over their heads as another alliance betrays them and one man will risk everything for a cause he believes in. Behind enemy lines, the risk of death is highly likely and minds will freeze in horror of what they have seen. Escape seems impossible and blood flows freely…

Chele Cooke’s Rack and Ruin is true action and science fiction suspense from page one as she pits good against evil, father against son and the fight for justice against the power mongers of the world. There is no rest to be found, so rest up, we are going into battle along this ragtag group of rebels with a cause.

Count on Chele Cooke to bring every scene to its full glory, ever battle to its horrendous life as you feel the sweat, smell the blood and know your own heart is racing! Chele Cooke has brought home another amazing read with a strong voice and an equally strong stroke of her pen.

I received an ARC edition from Chele Cooke in exchange for my honest review.