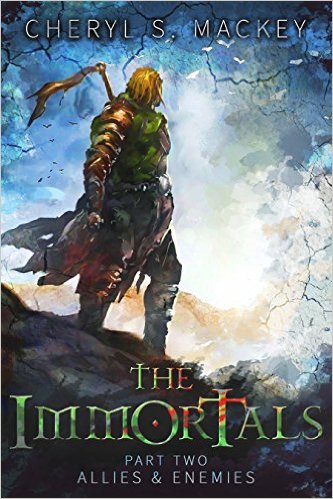 A mortal who believes in a different god.
A spy who once betrayed an entire tribe.
Who are their allies and who are their enemies?

Ivo, Jaeger, Jadeth, and Emaranthe are tasked with locating a lost city and to find it they need a map long held by their enemies. Traitors and rebels have flocked to join the Dro-Aconi, taking sides in a war meant to end all wars. When our heroes are joined by a spy seeking redemption, and a mortal seeking his destiny, the quest becomes one of life and death, love and loss, deceit and hope. Will they find the map in time? Or will they discover enemies among allies?

The Immortals were created to protect and defend the world against the evil Dro-Aconi. Ivo, Jadeth, Emaranthe and Jaeger now find themselves on a hunt for a lost city that will become a journey of life, death, questionable allies and deceit. In order to find the lost city, the only map that shows the way must be taken from their greatest enemy. Will their newest allies prove loyal or do they have their own agendas that will cause even more pain and death?

The only way to succeed will be to work together, using both their talents and information they have received, but can they trust the messenger? What is real? What is truth? One false move, one falsehood, one traitor and all will be lost. Who can they trust with the lives of the world?

Cheryl S. Mackey has once again; pulled me from reality and set me into the world she has created within only a couple of pages. The Immortals (Part Two: Allies & Enemies) feeds more in-depth detail about each character while introducing new elements into the tapestry of fantasy she weaves. Touch the landscape, feel the air move, smell the breezes, and believe in the world Ms. Mackey takes us to. Prepare for a battle of wits, force and follow their quest, once again. A must read for fantasy lovers, like me!

I received an ARC edition from Cheryl Mackey in exchange for my honest review.