Bound in Darkness by Jacquelyn Frank (The Immortal Brothers #3) 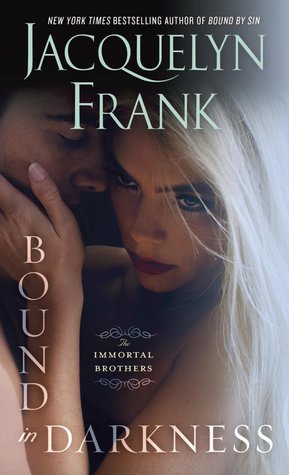 After drinking from the fountain of immortality along with his brothers, Maxum is condemned by the gods to be entombed in the earth. Even though he has now been granted a reprieve by day, each night he is buried anew, his rock-hard body immobilized, his bones crushed by the pressure. When he emerges, his body heals, but his spirit remains scarred. There is only one way for Maxum to be completely free: He must kill the god who cursed him.

The task will require tremendous power, so Maxum embarks on a quest to gather talismans to equip him for the battle. Then an earthy wench seduces him and steals one of his magical amulets, but he catches her. Finding herself between a rock and a hard place, she strikes a bargain. The beautiful and alluring Airianne is a skilled thief—and she can help him in his acquisition of the talismans. Will this stealthy seductress also try to steal his heart—or will their boldness end up getting them both buried?

Bound in Darkness by Jacquelyn Frank

What’s a girl to do? She just wanted to feed herself and get her horse out of the barn. So what if she picks the worst mark ever; a mark that has been cursed by a god. Now she just has to prove her worth as a thief, keep an unthinkable bargain and come out with her heart in tacked.

Maxum has been cursed by a god and the only way to free himself is to become a god killer. Searching for artifacts to help himself rid the curse, Maxum is robbed of one such artifact by a sexy thief named, Airianne.

Airianne convinces Maxum that she should join his all male crew to help steal the items he requires…and so starts the journey that thrust them together.

Lots of sensual tension, the heroes have lots of imperfections and a scary as heck antagonist bring Bound in Darkness to life. Overall, it is the ignitable chemistry between Airianne and Maxum that will keep the Frank fans riveted.

I did struggle a little with the characters likability. But once I hit the half way point, I found myself hooked.

This is the last story of the cursed brother and the epilogue ties the series up nicely. It gives you a taste of each of the participants lives and ties up the loose ends.

I received this ARC copy of Bound in Darkness from Random House Publishing Group - Ballantine in exchange for a honest review. This book is set to publish November 24, 2015.