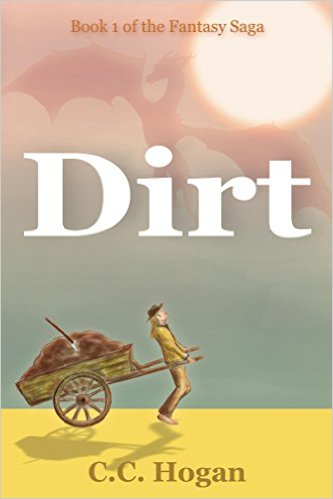 Book 1, Series 1 - A fantastic tale of love, war, friendship and dragons!
If Johnson Farthing thought that life as poor cart pusher in the coastal town of Wead-Wodder was going to be his lot in life, then he was about to get a rude surprise, and not necessarily a good one.
Once it becomes clear that his beautiful younger sister has been kidnapped along with the daughter of the Prelate, his life is completely turned on its head. Farthing has to rush across a vast ocean and a huge continent carried by an incredible Sea Dragon and accompanied by a strange magician if he has even a chance to save his sister Rustina.
And very strangely, neither the rich Prelate nor his chief of police seem keen to even lift a finger.
Dirt, the first book in a huge, continent spanning saga where dragons are an intelligent, cultured people, magicians cannot destroy mountains with a magic wand and the heroes have no wish to become tyrannical kings and queens.v
But through all the dramatic events, the battles of life and death, Dirt is a place of humour, love and ultimately, the quest to find a home.
"I told Truk you would be slacking off the minute he turned his back," shouted the old fool, Barkles, who sold greasy vegetable pasties from a dusty stall on the corner. "Young people can't be trusted, I told him. I was right too."
"Shut your face, Barkles," Johnson shouted back as he grabbed his coat from his hand cart and put it around his shoulders to ward off a faint chill in the sea breeze. "I have been down that hole every day non-stop for nine days, and you know it too, since you have been feeding me your disgusting pies for most of them."
"Pastries, slacker. Not Pies; Pastries."
"I thought pastries were just posh pies?"
"Can be."
"Well, yours ain't posh. So they are definitely just pies."
"Ain't seen you complaining!"

Welcome to the world called Dirt where dragons are real, magicians don’t need wands and the rest of society knows their place, never to rise above their station. Author C.C. Hogan has launched his Saga flagship novel with book One, Dirt as he carves out his world, his characters and thus begins his fantastical tale.

Johnson Farthing toils at his job daily. He shifts dirt from one spot to another, day after day, year after year. He is nothing special, just another normal human without the gifts that could elevate him higher on the “food” chain. And then, it happened, his sister was kidnapped and Johnson will do anything to get her back. Rustina is special, and she is not the only victim, but the powerful Prelate doesn’t seem concerned about the disappearance of his daughter. What does he know that Johnson doesn’t? One thing Johnson does know is that he will stop at nothing, to save Rustina.

So begins the incredible journey of Johnson Farthing, as he crosses oceans, treks across foreign lands and meets both friend and foe along the way. As his group of unlikely companions grows, Johnson finds himself in the company of a quirky magician, a sea-going dragon. Will these unlikely heroes save the day or is this just the tip of the iceberg for the new life and adventures of the once lowly dirt shifter?

C.C. Hogan says he wrote a tale he would like to read, which means it comes from his soul as a magical world unfolds before us with a cast of characters that are endearing, where the battle of good versus evil is a constant reminder that the world they live in is not perfect and a battle for a better life for all is on the air. Follow Johnson as he discovers a new him, an improved him as he tears down the invisible barriers he has always lived behind. Prepare for humorous moments during times of darkness, unexpected twists and help from unlikely sources. Enjoy the details of each scene, imagine the sights as seen through Johnson’s eyes as he witnesses new lands and meets the people who inhabit them. Part adventure, part coming of age in a world on the verge of change and part mastering the art of building relationships and learning when to trust and when to watch out for darkness and deceit.

Driven by amazing characters, this is definitely an epic fantasy in the making. Sit back, relax and travel to the world called Dirt. Well-written, fabulous dialogue, inspiring and creatively mesmerizing, C.C. Hogan is creating a strong platform for more in this epic series.

I received an ARC edition from C.C. Hogan in exchange for my honest review.