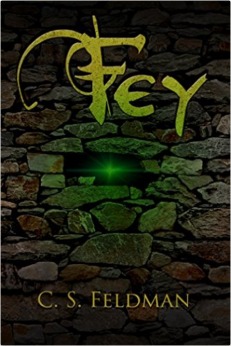 Nessa Donnelly never expected to see her estranged and eccentric father again, but a phone call summons her back to her hometown and to the hospital in which the elder Donnelly lies in a comatose state for which his doctors have no explanation. Bit by bit, long-buried family secrets emerge, and Nessa begins to realize that those secrets were kept hidden from her for a reason.

She also realizes that there is something in the woods behind her father’s house that he never told her about, something that can’t be explained.

You had me at Fey, but Feldman kept me with the new original tale.

Nessa is a happily married woman that left her home town and never looked back. Faced with a family emergency, Nessa discovers a family secret that will rock her childhood perceptions.

Will she find the strength to carry on and protect the one’s she loves?

This was a slow building story that eventually I realized I was completely sucked in.

I am a huge, HUGE, fey, fairy, fae, fan so when I was offered C. S. Feldman’s first Fey story of course I was on board. That being said, I am very picky about this topic and I was pleasantly delighted with Feldman’s story.

Although, it did have a good amount of suspense and a very creepy villain there was nothing that would keep recommending it to a fantasy teen reader.

I’m hopeful that this is a start to a new Feldman world to explore.

I received this copy of Fey from C. S. Feldman in exchange for a honest review.