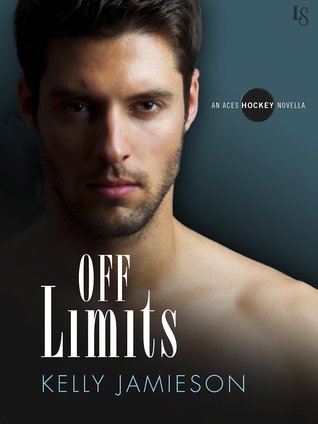 Off Limits
My Rating: 5 Stars

The Christmas season always puts a smile on Jenna McFadden’s face. Even though she’s bringing a boyfriend home for the first time, inside she’s dying to see Andrew. Years ago, when the McFaddens took the troubled teen into their home, Jenna had to keep her blazing-hot crush a secret. And now that he’s playing pro hockey for the NHL’s Chicago Aces, nothing’s changed. With his wide shoulders and taut muscles, Andrew’s the most tempting package in the house . . . one that Jenna’s dying to unwrap.

Andrew Ross just can’t make a play for Jenna. Her dad and brothers wouldn’t approve, and he could never betray the trust of the wonderful people who treated him like family when he lost his own. That’s what makes the holidays so hard. Whether Jenna’s skating with Andrew on a frozen pond or sitting on his lap while he plays Santa, she’s pushing all their boundaries—and there’s only so much a man can take. Andrew knows that she’s off-limits. But something deep down tells him that Jenna’s heart is the one prize he simply has to win.

Includes a special message from the editor, as well as an excerpt from another Loveswept title.

Off Limits by Kelly Jamieson

Coming home for Christmas will never be the same. Off Limits is a based on a quirky hockey playing family with lots of love to share.

Andrew is a successful hockey player and the one constant in his life has always been the McFadden family. Coming home and meeting Jenna’s new boyfriend ignites all kinds of emotions, but none of them he feels he can explore. He would never risk his only home and family…or will he.

Sometimes you just got to shake things up to ring in that holiday spirit, Off Limits gets those bells ringing.

Off Limits was a quick, fun, entertaining and emotion evoking read.

I received this ARC copy of Off Limits from Random House Publishing Group - Loveswept in exchange for a honest review. This book is set for publication November 17, 2015.