Say You're Mine by Diane Alberts (Shillings Agency #5) 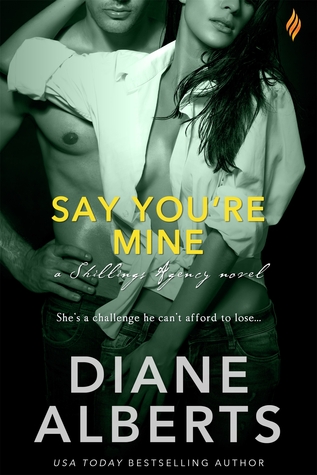 She's a challenge he can't afford to lose...

Navy SEAL Steven Thomas has only ever been able to count on three things: waking up in the morning, going to sleep sometime during the night, and Lauren Brixton. She's been his best friend since grade school, and what they have is the only relationship he's managed not to ruin.

Until one drunken night puts that all in jeopardy.

Lauren's watched Steven flit from one-night stand to one-night stand, seemingly not interested in something more. So when the long-ignored attraction between the two of them blows up in their faces, she does the only thing she can-she pretends she doesn't want him. But all's fair in love and war, and Steven's not about to lose the only person in his life who matters...

Say You're Mine by Diane Albert

Say You’re Mine rocks the classic falling in love with your best friend romance.

Lauren has always watched Steven play the field, never settling down. How can she trust a drunken night of passion has changed his ways?

Steven finally realized what has been missing. Its been standing right in front of him as his best friend Lauren. Now he just has to convince Lauren that its worth the risk.

A sweet and sexy romance between friends, Say You’re Mine was a perfect contemporary military romance. Caught up in their story, I found myself emotionally connected to the characters.

I received this ARC copy of Say You're Mine from Entangled Publishing, LLC - Entangled: Brazen in exchange for a honest review. This book is set for publication December 7, 2015.