Point of No Return by Diana J. Febry 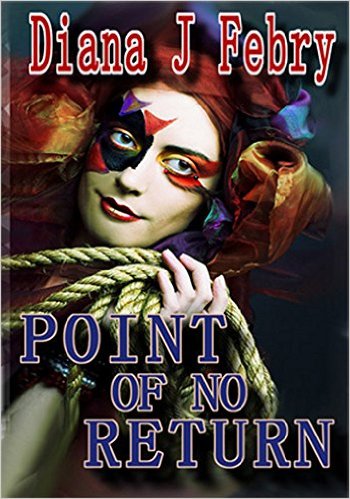 Point of No Return
by Diana J. Febry

The significance of the noose left hanging outside James Palmer’s barn is obvious to everyone in the village. When threats turn to violence DCI Peter Hatherall has to unmask a master of disguise determined to have their revenge.
“Nothing to be sorry about. Your mother can’t wait to have you home. We’ll soon have you back on your feet again.”
Digby shuddered. Gratitude at their blind faith clashed violently with anger. The fear of facing another person, who still believed in him when he no longer believed in himself, sliced through him. The knife glowed red hot, the butter creamy and soft. He reached for the door handle. If he hurled himself from the car, the pain would stop.
“I rang her with the good news as soon as it was announced. She was right happy.”
Digby released the car handle and sat on his hands to resist the overpowering urge to wrench the door open. Cold sweat ran down his back as he fought the desire to obliterate himself. The pressure of expectation only an only child can know, pinned him to the seat. He swallowed hard as the turning to the right approached. The switch-back lane followed by a tight turn to the left past Palmer’s farm house before the road dipped down towards their small cottage at the foot of the hill. A gush of air involuntarily escaped his lungs as the car sailed past the turning.

Point of No Return by Diana J. Febry

Are you ready for a good old-fashioned murder mystery that starts out with the tumultuous thoughts of a man in the depths of despair? Was Digby the monster the world thinks he is? After all, he was driving the vehicle that went out of control and killed his passenger in a horrific accident. He blamed James Palmer, who was driving the tractor that impaled his passenger and although cleared of fault, Digby took his life by hanging himself on Palmer’s property. Is that what really happened or is there more to the story than meets the eye? Why has someone put another noose in that very tree? What does “You’re next,” mean?

Enter DCI Peter Haterall and his partner, DI Fiona Williams when Palmer becomes the target of threats. Are these threats more than just idle thoughts or have Palmer’s sins finally caught up with him? A wealthy womanizer who seemed to forget he was married with family, he is an outsider in this close-knit community. Accused of everything from being gay to being too rich, the threats are turning actively deadly and the list of possible suspects becomes longer by the day and, as they say, the plot thickens as it becomes an uphill battle for Haterall and Williams to get to the truth.

Point of No Return by Diana J. Febry is a twisted, character driven tale with a dash of dry humor, a cast of often quirky suspects with good cause and a twisted path of clues to follow. From the great dialogue to the mystery of “who dunnit” to amazing world building, Diana J. Febry will stump even the best sleuth out there as we all don our detective gear to ferret out the answers before those dreaded words, THE END!

Enjoy the rollercoaster twists, the subplots and pick your perpetrator, who knows, maybe it was the butler! Great reading and a great mystery that peels back each layer one page at a time as you become hooked and have reached the Point of No Return!

I received this copy from Diana J. Febry in exchange for my honest review.