Reflection: The Stranger in the Mirror by Rachel R.Smith (Records of the Ohanzee, #1) 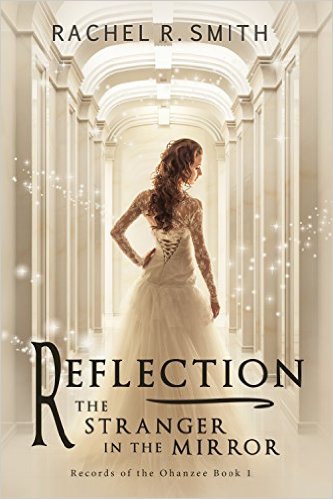 Reflection: The Stranger in the Mirror
by Rachel R. Smith

An Heiress, an ancient prophecy, and a masquerade...
Nerissa, the Heiress of Chiyo, prepares for the masquerade celebrating the twentieth anniversary of a thwarted assassination attempt on her family. Longing to be admired for herself and not her title, she arranges to switch costumes and enjoy the ball in blissful anonymity. But, when the fateful night finally comes, a prophetic warning of a second attack arrives too late, and the evening turns from revelry and romance to violence. After being pulled from the chaos by an enigmatic guardian, Nerissa learns that the Royal Family has been concealing a formidable secret for generations--and it is only one of many that are about to be revealed.

Reflection: The Stranger in the Mirror by Rachel R.Smith (Records of the Ohanzee, #1)

All she wanted was a chance to feel like a real girl, to be treated like a real girl, but the night of her great adventure turned into a night of her greatest nightmare. Will Nerissa, the Heiress of Chiyo and lone survivor of the royal family ever get over the burden of her grief and guilt? Saved from the attack on her family by a secret guardian, her survival must remain secret as her kingdom is overpowered by its technologically advanced neighbor. Will the mystical nature of Chiyo and the survival of Nerissa bring forth ancient prophecies to be fulfilled? Will it mean she will finally learn the secrets of her ancestors that have been hidden from her for so long in the magic of the crystals?

Follow Nerissa’s often painful journey in Reflection: The Stranger in the Mirror by Rachel R. Smith as we travel through a world split by magic and technology, greed and deceit, to be witness to the rise of a strong-willed leader in the making.

Rachel R. Smith has blended dark and light, mystical aspects, and the growing pains of one girl, who only wanted to spread her wings for a few hours. This is fantasy, a world we can create in our own minds from the wonderful descriptions provided by this author who also changed POVs for more depth and a different take on the same events. From the amazingly magical cover to the very last word, Rachel R. Smith had me enthralled as she set the foundation for a new series that promises some surprising twists!

I received this copy from Rachel R. Smith in exchange for my honest review.