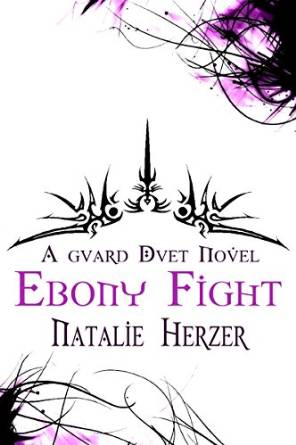 A witch on the run

After allying Lillian’s Ivory Guard, Becca is determined to round up more like-minded demons and Ebonys that could help in their fight against the old system. She knows her actions draw unwelcome attention and that she has to be careful now more than ever before.
So, is she foolish to trust Stone, the man who saves her brother's life - and stirs her blood?

A demon out to get her

Stone is as cold and hard as his namesake. When he infiltrates a group of rebellious demons to find out how far the do-gooder attitude has spread, he doesn’t even blink at his orders to kill the leader. What he didn’t count on was Becca - the hot whirlwind turning his world and heart upside down.

…and all hell breaks loose.

The eternal battle between dark and light, good and evil continues, not just among humans, but among those of heaven and hell. The divide grows murky as one witch escapes the dark realm to show her brother there is good in the world and everyone deserves a chance to share it. After convincing the Ivory Guard to stand with her, Becca is determined there are more demons and Ebonys alike who want to choose their destinies. It’s time for change in the system that has controlled them and rebellion is dangerous as Becca is soon to find out. Both her life and her heart are in danger and the threat comes from the cold-hearted demon, Stone.

Stone’s mission was not unusual, he is an assassin, but one look at Becca, battling against the odds with pure grit and determination, something very dead inside of him sprang to life. Has this witch cast a love spell on him? Is it possible that her quest has merit? He is bound to complete his duty, but his dark heart is beginning to learn what the words joy and happiness really mean and he owes it to one small witch with a heart of gold.

Natalie Herzer’s Ebony Fight has become the latest gem at the top of my reading pile! Filled with unlikely allies, sworn enemies and an uphill battle for change, Ms. Herzer keeps the emotional tension taut as two dark souls discover the beauty of attraction and the tentative threads of trust in a harsh and deadly world. With a delightful cast of characters, fierce warriors and heart-wrenching loss, Natalie Herzer has created a world desperately in need of the hope that Becca and her allies provide with their own blood, sweat and tears while leading the reader safely through another adventure. Highly recommended if you like well-written fantasy that knits together a tale of bravery, change, trust and a budding romance looking for a new future.

I received an ARC edition from Natalie Herzer in exchange for my honest review.