Outpost by F.T. McKinstry (The Fylking #1) 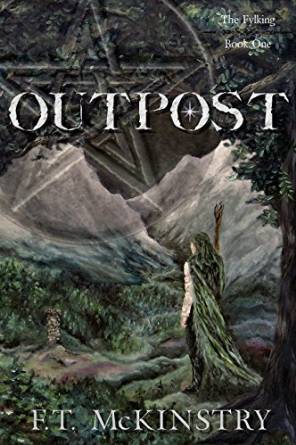 In a war-torn realm occupied by a race of immortal warlords called the Fylking, trouble comes with a price. Using the realm as a backwater outpost from which to fight an ancient war, the Fylking protect the portals between the worlds by the sword. Their enemies, without pity, are bent on annihilation.

Arcmael is a seer with a tormented past. A servant of the Fylking, his solitary life takes a turn when he’s set upon by a warlock gathering an army of warriors that cannot die. Othin, a seasoned ranger who defends the realm, is snared in a political trap that forces him to choose between love and honor. A knitter touched by the gods catches the eye of a dark immortal with no name and the power to summon storms.

Bound by synchronicity, these three mortals are caught on a wave of rising darkness, murder, treachery, sorcery and war. Finding allies in unlikely places, they must rally to protect the boundaries of the Otherworld against a plot that will violate the balance of cosmos, destroy the Fylking and plunge the world into ruins.

The god they serve is as fickle as a crow.

Outpost by F.T. McKinstry (The Fylking #1)

They became three misfit warriors, allies in the battle between good and evil. Now the fate of their world lay in their hands. Welcome to the Outpost, where the portal to another realm must be kept closed or the wrath of hell and power hungry monsters will plow every living creature down in a bloodbath of terror and annihilation.

The Fylking, alien immortal warriors have long used the realm as an Outpost against infiltration from an ancient intergalactic foe and its army of zombie-like soldiers.
Arcmael a seer and once the son of power and wealth, has chosen a solitary life where he has become the servant of the Fylking. It is time to leave his tortured past behind as the dangers of magic and war become an ever-growing threat. Will he rise up from the ashes of his life with newfound pride and purpose?

Melisande will live through the vilest of circumstances, in part because she has a god-given power to knit magic into the yarn she uses. Feared by her countrymen and sought after by armies, her heart belongs to one the one man who has been kept from her through politics and treachery. Othin’s duty is to defend the realm, but one night of drunkenness leaves a gap in his memory that will be the tool of blackmail used, forcing him to choose between his love for Melisande and his sworn duty to uphold the honor of another. Together these three will make unlikely heroes most likely to die, but in times of need unlikely allies will rise to stand with them. Follow their journey, watch their hidden strengths evolve as the world around them becomes a battleground for warlocks, immortals and the soldiers of a dead army.

F.T. McKinstry has shown great strength in writing and blending three separate tales, one for each character into one huge tapestry of suspense, treachery and magical wars. From the details of scenes that seem to come from the past, take the paths uncovered through dense and deadly forests and step inside a small cottage with the smell of wood smoke and herbs. Watch as each character comes to life, or in the case of the draugr, re-animate in death. A well told dark fantasy that twists around itself like a cobra waiting to strike.

I received this copy from F.T. McKinstry in exchange for my honest review.