Between the Two of You by Melissa Lynn 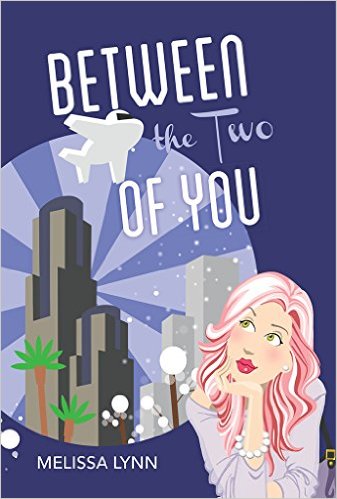 Between the Two of You
by Melissa Lynn

As a trained accountant in Quebec, Amy Lefevre will be the first to admit that her life is not quite adding up. After all, how can anyone in her twenties already be in such a serious rut? When she decides to shake things up and create a new life in Winnipeg, Amy’s world suddenly takes a turn for the fabulous. His name is Jason, and he happens to be a card-carrying movie star.

Between The Two of You is the romantic comedy that follows Amy as she cultivates a serious crush on the dashing Jason Lane, only to soon find out that she has some fierce competition. Can Amy win Jason’s affection? And, above all, is it really what she wants?

Along the way, Amy finds plenty of support from old friends and new; a little side romance; and even a star-studded job prospect with Jason’s agent, David. Can they help her meet her bottom line—a brand new exciting life? Find out in this hilarious, endearing story of one woman’s quest of taking chances, which serves up plenty of heart-racing moments and as many hearty laughs.

Between the Two of You by Melissa Lynn

Sometimes you just need to take that first move to creating a new you, but beware, the old you is still alive and well inside! Amy is only in her twenties, but her life is already, well, conservatively boring, little did she know it was about to do a complete 180 and find that life in the fast lane on planet thriller may just be a little too wild for her!

Who knew Amy would actually catch the eye of one of the world’s hottest men, a genuine movie star, living his own version of life in the fast lane. Jason has it all, charm, charisma and looks, as well as planned lines to get into any girl’s bed, too bad our Amy is a little naïve, or cleverly pretends to miss the double meanings. Meanwhile, David, Jason’s best friend and agent has found that there is something special about the beautiful accountant, of course, how could she notice him with Jason’s stars in her eyes? Let’s not forget that Jason is about as deep as mud puddle, and an old flame seems to be his favorite plaything.

What’s a girl to do? Believe they had something special or hope to prove to Jason she should be his leading lady? Maybe it’s time to tally the columns and find out if Jason really is her bottom line.
Prepare to chuckle, be completely astounded at Amy’s growing list of admirers and how inept she is at handling them! Between the Two of You is a delightful tale of romance and humor from Melissa Lynn. Talk about creating a character that is an instant hit, but clearly out of her league in the fast-paced world she wants to be part of. I could not help but like Amy, clueless or not, she has a brilliant mind, it’s her heart that needs to make up its mind. Jason is a player, but he is hiding something from his past. David is the typical best friend, loyal, always looking out for his buddy, but struggling with admitting his feelings for Amy. No, this is not a love triangle, there is a fourth player who shows up to muddy poor Amy’s mind! So who gets the girl? Guess you’ll have to read between the Two of You to find out! Sweet, light and a little fluffy, perfect to bring a little sunshine into your day!

I received this copy from the author, Melissa Lynn in exchange for my honest review!