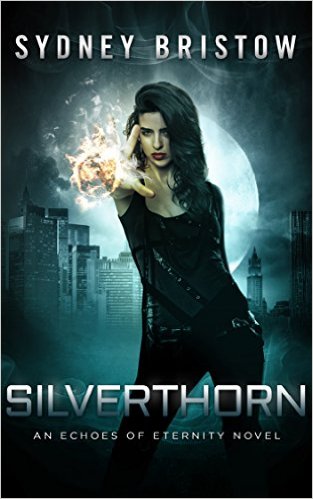 Serena Sykes will need to gain control of her latest supernatural ability now that Darius Coyne, the last remaining master vampire will stop at nothing to kill her, so he can rule the world beside the love of his life, the ancient sorceress, Zephora.

And if they don’t destroy Serena, the tight-knit group of friends who fight alongside her might do it for them. Her tortured romantic relationship with Nolan, who takes away more from Serena than just pleasure each time they touch, may be more inclined to help Darius than he’s letting on. And her identical twin sister, Alexis, and her niece, Celestina, take turns playing both willing ally and potential enemy.

In a race against time, Serena must vanquish the enemies that attack her at every turn and fight to keep her friends alive, sane, and on good terms, while also trying to locate the mythic Book of Souls…if she hopes to defeat the ultimate power couple.

Non-stop tension, non-stop danger, and non-stop action, pretty much describes Sydney Bristow’s Silverthorn. Serena is getting used to the idea of being a witch who comes from a twisted witchy lineage. Determined to NEVER go over to the dark side like her newfound family, she still waits for her final power to come online. If it should be anything like the first tow, she is in for a huge adjustment! The last remaining Master Vampire is gunning for her due to the fact that she and her family hold the spirit of the first witch of their line within the body of her mother as the witch attempts to return from “the other side.” Darius will stop at nothing to get his long lost love back, including killing anyone who gets in his way. The stakes are raised as an ancient spell book is found and it can only be read by one witch, Serena’s niece, the most powerful witch ever. Not too much pressure for a seventeen-year-old to handle, right? Kind of like putting the fate of the world in a teen’s hand, oh wait, that is exactly what is happening. Will Darius succeed in stealing both Zephora and the ancient tome? Does he have a plan to distract Serena and her friends long enough to pull it off?

Meanwhile, an impossible romance is developing between Nolan and Serena, but it looks like what he gives can never outweigh what he will take from Serena. It becomes a dangerous game of hide and seek as Serena and her friends race to set the world right before it crashes into darkness. The threat of death and destruction makes strange allies, and could it be that Serena may have found the strangest ally in her dark-hearted twin sister? Is everything what it seems or will darkness have its day?

Sydney Bristow keeps the pace and the plotting on a twisted roller coaster of chance as Serena comes of age, gains confidence in being herself and realizes her own self-doubt is holding her back. Sometimes light-hearted, sometimes dark and furious, each page will pull the reader deeper into the world Ms. Bristow has created. The passion is in the action, there is no place for fear, but the fate of the world may lie on the shoulders of a ragtag group of supernaturals who can’t always seem to even get along!

I received this copy from the author, Sydney Bristow, in exchange for my honest review.