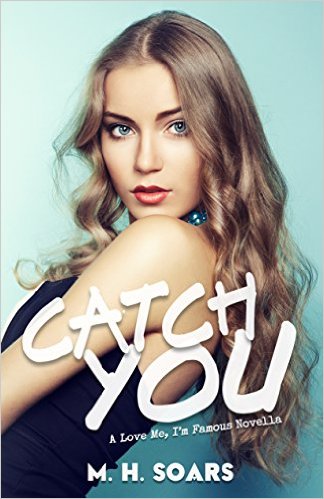 Catch You
by M.H. Soars

Kimberly
I had always thought Owen Whitfield fit the mold of the brainless jock perfectly. Group of idiot friends? Check. Vapid girlfriend? Check. Ego bigger than the moon? Check. As long as he stayed out of my way, coexisting with his kind was doable. Until one day our worlds collided, changing everything. He pissed me off so badly that I had no choice but to give him a taste of his own medicine. Little did I know that my act of revenge would come back to bite me in the ass. How was I supposed to know Owen would turn out to be the best partner in crime I could hope for?

Owen
I never paid much attention to Kimberly Dawson, but I knew who she was. Ice Queen was what we called her. She was gorgeous, no one could deny that. But she was also a condescending bitch which was enough reason for me to stay the hell away from her. She thought I was a dumb jock and that was okay until she came crashing into my life. Against my better judgment, I let her embroil me in her shenanigans, forcing us to spend too much time together. It was my doom. She got under my skin, she was all I could think about. I never thought I would be the knight in shining armor to anyone, not until she came along.

Author's Note: Due to mature content, this novella is recommended to readers 18+

Catch You by M.H. Soars

Let’s teach the brainy high school newspaper reporter and the arrogant jock that just maybe they each have redeeming qualities by throwing them together on a hunt to prove that the wrong boy has been accused of a crime and the actual criminal is a high school hero. Kimberly, the school Ice Queen and Owen, the in-crowd jock will discover who truly has your back and who really knows your soul when their lives are on the line in this entertaining high school romance filled with the suspense of “the chase.”

It wasn’t enough that the gods had given Kimberly Owen as her English project partner, does he have to be so full of surprises and well, brains, too? Like an annoying flea that keeps buzzing her ear, Owen seems to revel just a little too much in keeping Kimberly off center. For her part, Kimberly must determine to partner with Owen on her secret mission to uncover the truth behind the school thefts.

And like they say, opposites attract, but are they truly opposites or are they both victims of the games people play? What will they find if they survive their amateur private investigating?
M.H. Soar has taken teen high school drama to a new high in Catch You a she splits the points of view between Owen and the feisty Kimberly. Half mystery, half “the worst of high school” antics, there is humor, anger, immaturity and determination that will both amuse and glue you to each page just waiting to see what will happen next between these two charming characters.
Don’t look for a deep and cerebral read, look to be entertained as life at high school just got a whole lot more interesting! Great dialogue, great tension, with a little luck and heroics thrown in.

M.H. Soars has a giveaway going on for her readers
To Enter, Click on the link below.
This contest has no affiliation with Tome Tender

http://yournextbookcrush.com/giveaways/catch-you-mhsoars-giveaway/
Posted by Dii at 9:15 PM